Nicholas Ochs, who heads up the Hawaii faction of the far-right extremist group, is arrested by FBI agents at Daniel K. Inouye International Airport in Honolulu.

AceShowbiz - A Proud Boys leader has been arrested for taking part in the Capitol Hill riot on Wednesday, January 6. Nicholas Ochs, the founding member of Proud Boys Hawaii, was arrested by FBI agents as soon as he touched down at Daniel K. Inouye International Airport in Honolulu on Thursday, following his trip to D.C. to storm the Capitol.

According to an unsealed indictment, Nicholas is charged with unlawful entry into restricted buildings or grounds. This came after he made ridiculous comment on social media and CNN to defend his presence inside the building, claiming he was acting as a "journalist" during the siege.

On the day of the riot, Nicholas shared a picture of him smoking a cigarette with another male protester inside the Capitol. "Hello from the Capital (sic) lol," he captioned the photo posted on his Twitter account. 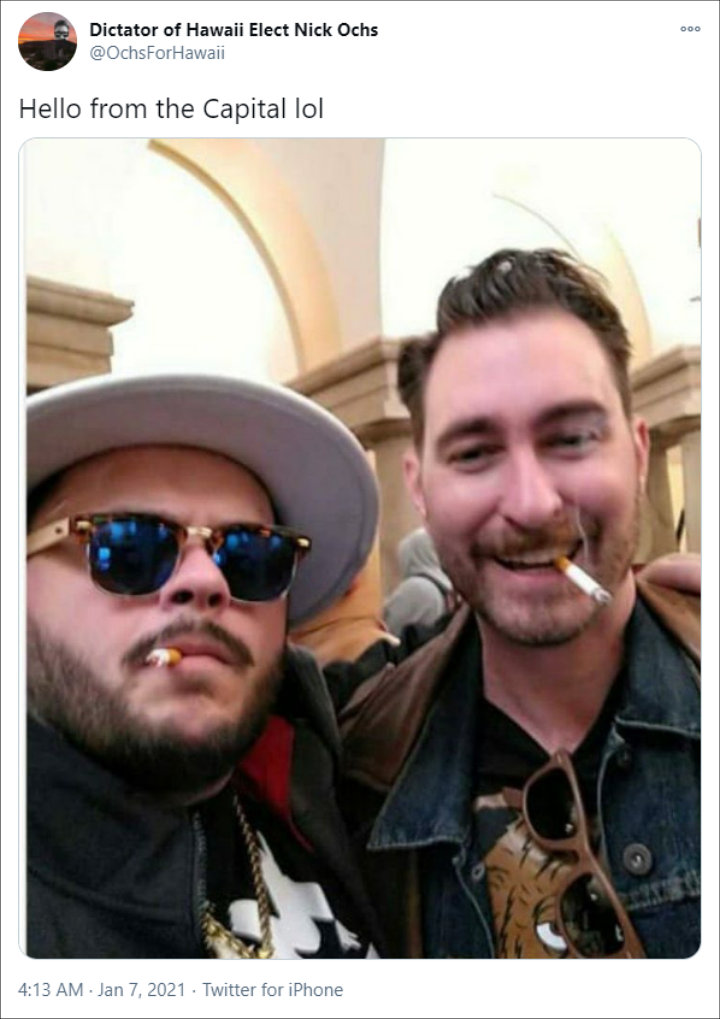 One day after the attempted coup, he claimed he was there working as a professional journalist. He also said that he didn't break in and that he simply entered without incident.

As other incriminating evidence, the feds listed his post on Parler app, including one from November which read, "Show this tweet to leftists and say they won't do s**t when he just keeps being president." He added, "They are getting scared, and they don't function when they're scared."

Nicholas, who unsuccessfully ran as a Republican for the state House District 22 seat in 2020, is expected to virtually appear in federal court in Honolulu on Monday, January 11. The Department of Justice is seeking his removal to the District of Columbia to face the charge.

His lawyer says he is being held in federal custody in solitary confinement due to the ongoing coronavirus pandemic. Nicholas' confinement is expected to last 21 days as part of a required quarantine.