The Bravo personality, who is currently expecting her first child together with boyfriend Brock Davies, previously also received hate comments over her plan to pierce her baby's ears.

AceShowbiz - Scheana Shay learned first hand how awful internet can be. On January 6, the "Vanderpump Rules" cast member opened up about disgusting DMs on Instagram that she received, one of which was asking permission to kill her unborn baby.

"This is by far the worst one I've ever received," the Bravo personality wrote alongside a picture of her highliting messages that read, "Can I push hard on your baby...to kill it." Clapping back at the hater, the 35-year-old pregnant star wrote, "And this b***h has a photo with a kid in her profile!!!! Wow!!!" 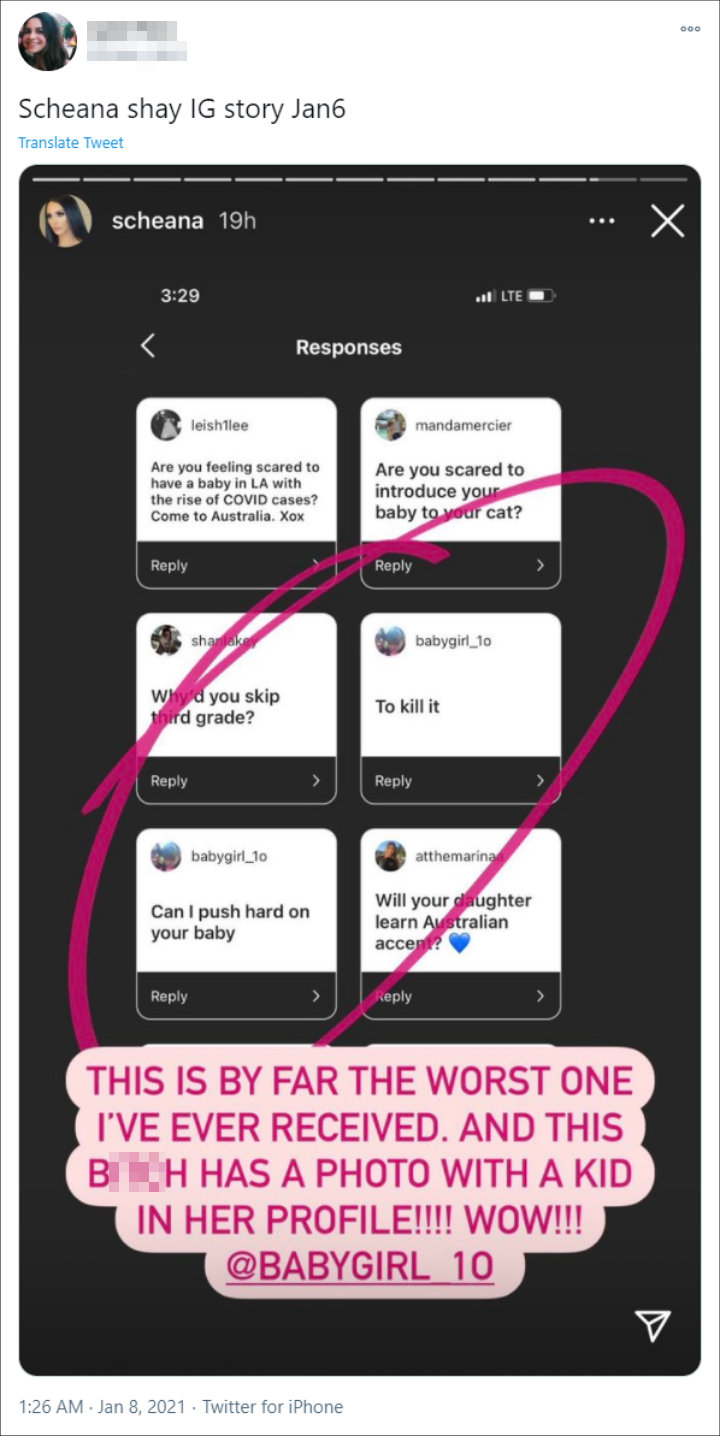 This is not the first time for Scheana to receive hate comments regarding her unborn baby. The California native previously fired back at trolls who criticized her over her plan to pierce her baby's ears. "Go ahead and judge me," so she said in a November 2020 episode of her "Scheananigans With Scheana Shay" podcast.

Her mom Erika van Olphen also came to her defense back in October 2020 amid rumors that Scheana's pregnancy was only for her to follow the trend, considering her co-stars Lala Kent, Brittany Cartwright and Stassi Schroeder are all also pregnant. "First of all, if you truly knew Scheana and or followed her on her YouTube channel, you would know that she has struggled with fertility for years," Erika tweeted at the time.

"She has gone through two rounds of freezing her eggs and while deciding to possibly do a third round, she was blessed with a pregnancy. After [she suffered a miscarriage], her doctor advised her to wait one ovulation/one period cycle and she could try again!" she went on saying. "For those who said she should've waited six months, she followed doc's orders. After waiting over a month, to our surprise she got pregnant again. Yes, she was scared but so very grateful!!"

Scheana and her boyfriend Brock Davies announced that they're expecting a child together last October. "IT'S ALL HAPPENING APRIL 2021!!! We are expecting our rainbow baby! ... The most amazing news of my life!" so she revealed on Instagram. Brock, meanwhile, commented, "We did a thing honey. I'm so happy I have you to balance me out, I love you honey. Congratulations to us!"