Reddit co-founder Alexis Ohanian claps back at Ion Tiriac, the owner of the Madrid Open, who suggests that the former tennis ace should retire 'at this age and the weight she is now.'

AceShowbiz - Serena Williams' husband is not letting anyone say negative things about her. Upon learning that Ion Tiriac attacked his athlete wife over her weight, Alexis Ohanian fired back by labeling the owner of the Madrid Open a "racist/sexist clown."

The Reddit co-founder took to Twitter on Monday, January 4 to lash out at Ion. "2021 and no holding back when a racist/sexist clown with a platform comes for my family," he tweeted. Hours prior, he commented on a tweet featuring an article that contained the former tennis player's offensive remarks about Serena. "Safe to say no one gives a damn what Ion Tiriac thinks," he argued.

Alexis then put out another tweet with a screenshot of a page that showed Ion had zero Grand Slam title. "Had to Google it... turns out my 3 year old has more Grand Slam victories than this," the 37-year-old internet entrepreneur hit back. 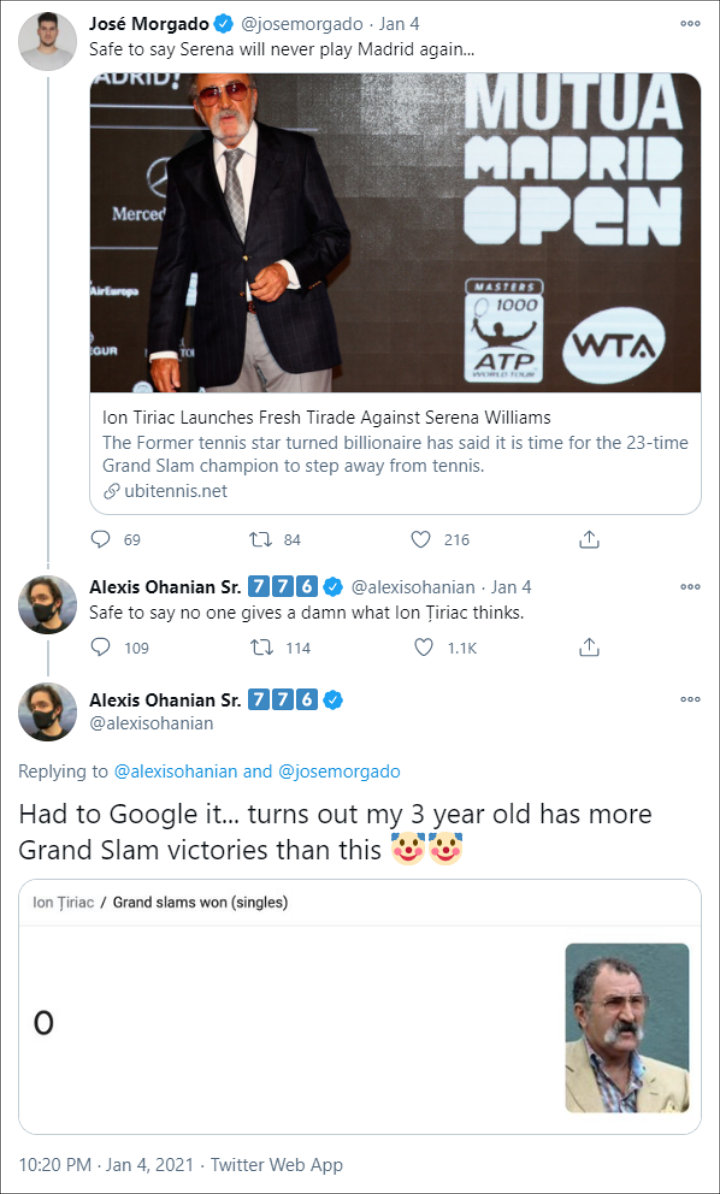 Alexis' clapback came shortly after Ion publicly criticized Serena. "Serena was a sensational player," the former tennis pro player told Romanian public channel TVR. "If she had a little decency, she would retire. At this age and the weight she is now, she does not move as easily as she did 15 years ago."

This was not the first time Ion made offensive remarks about Serena. Back in 2018, he also addressed the 22-time grand slam champ's weight by stating, "With all due respect, 36 years old and 90 kilograms…I would like to see something else, I would like to see a player like Steffi Graf."