The online beef starts after the WWE star, who stays incharacter, responds to one of the Bronx rapper's tweets, challenging her and bringing in Cardi's rap rival Nicki Minaj in the process.

AceShowbiz - Cardi B and WWE star Lacey Evans exchanged some words on Twitter on Tuesday, January 5. The online feud between the raptress and the wrestler started after the former was mentioned by Vince McMahon during "Monday Night Raw", prompting people to speculate that Cardi would make an appearance at WWE WrestleMania 37.

In response to the name-drop, the "Bodak Yellow" spitter wrote on Twitter, "WWWWTTTTFFFFFFFFF ....This is not how my wwe debut was supposed to be ! Vince McMahon COUNT YOUR F***IN DAYS !!!!" Cardi then revealed that Trish Status, Booker T and others were some of her favorites.

Despite not being mentioned, Lacey decided to chime in. She responded to Cardi's tweet, challenging her and bringing in Cardi's rap rival Nicki Minaj in the process. "Careful what you wish for ya nasty..... we aren't @NICKIMINAJ," so Lacey wrote to the Bronx musician, adding, "You'll get sent home with more than a busted eye."

The mention of Nicki seemingly was the last straw for Cardi. The wife of Offset lashed out at the athlete, writing on the blue bird app, "A white woman can't never put fear on me sweetie... Got me f***ed up. I was showing love to WWE the whole night yesterday I don't know where the f**k you came from with your unnecessary bulls**t." However, she deleted the tweet after many reminded her that it was just Lacey being in her character.

Despite being deleted, one fan was quick enough to take a screenshot of the tweet. It didn't take long for Lacey to catch wind of the screenshot. In her response, Lacey explained that the Grammy-winning raptress misinterpreted her tweet, writing, "Awww bless your heart! @iamcardib U got it all wrong. I heard DEBUT and was giving you a friendly heads up."

She was then back to her character and doubled down on her previous statement about beating Cardi down when they met. "But since you wanna be bad a**... keep me in mind when/if you show up to WWE. I'll kick your a** while listening to your music #PullUp," she added. 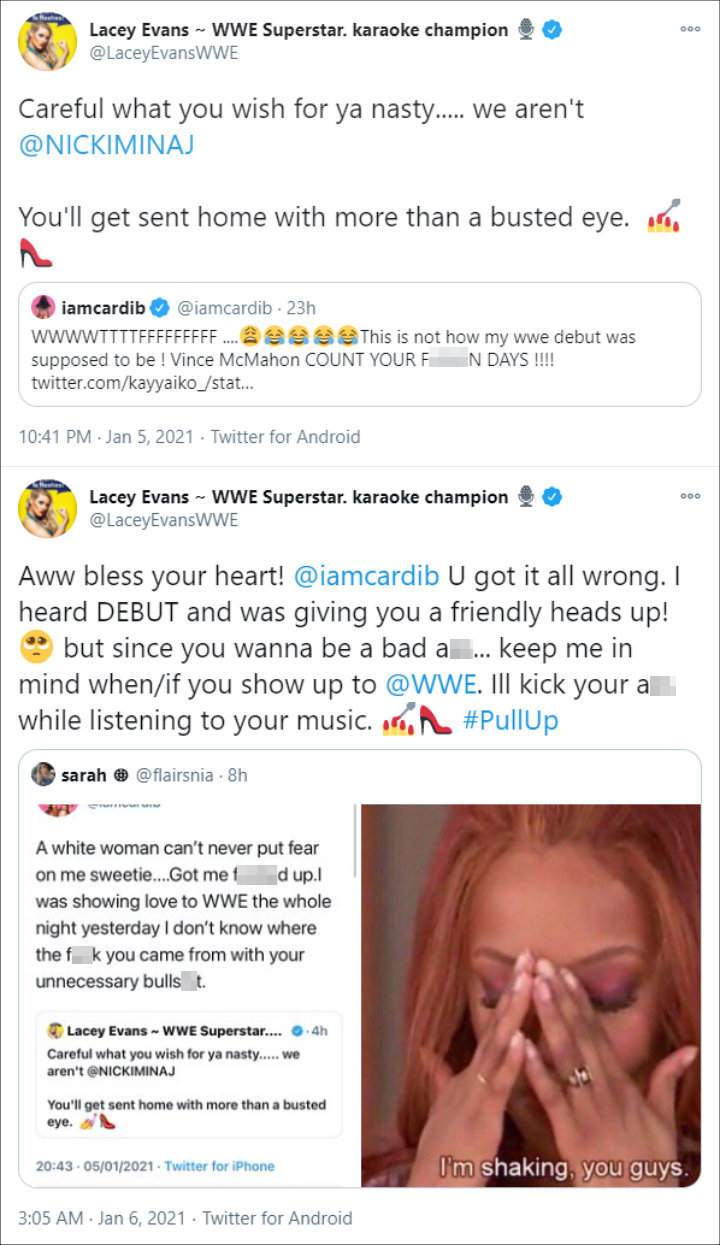 Cardi has yet to respond to Lacey's recent clapback.

Dr. Dre Assures He'll Be Back Home Soon After Hospitalized for Brain Aneurysm