The 'Willow' songstress has been removed from the iconic mural at Legends Corner on Lower Broadway which is dedicated to some of country's biggest superstars.

AceShowbiz - Taylor Swift's status as a country music star is once again questioned after she's removed from a famous Nashville mural. The Grammy Award-winning artist has now been replaced with another country music singer, Brad Paisley, on the iconic mural at Legends Corner on Lower Broadway in Nashville.

The mural, which is dedicated to honor some of country's biggest superstars, is one of Music City's landmark attractions. It features 14 icons, including Reba McEntire, Willie Nelson and Dolly Parton.

Artist Tim Davis who painted the mural apparently felt that the mural needed some changes. He has reportedly said that Taylor's image is being retired and 3 other stars, including Brad, will join the mural. While Brad's face has been displayed on the mural, it's currently unknown who the other two stars will appear on the mural.

Needless to say, Swifties are enraged by this. "they really replaced taylor swift with brad paisley on the country legends mural in nashville as if taylor hasn't always been more popular than him," one person tweeted along with picture of the mural before and after the change was made. 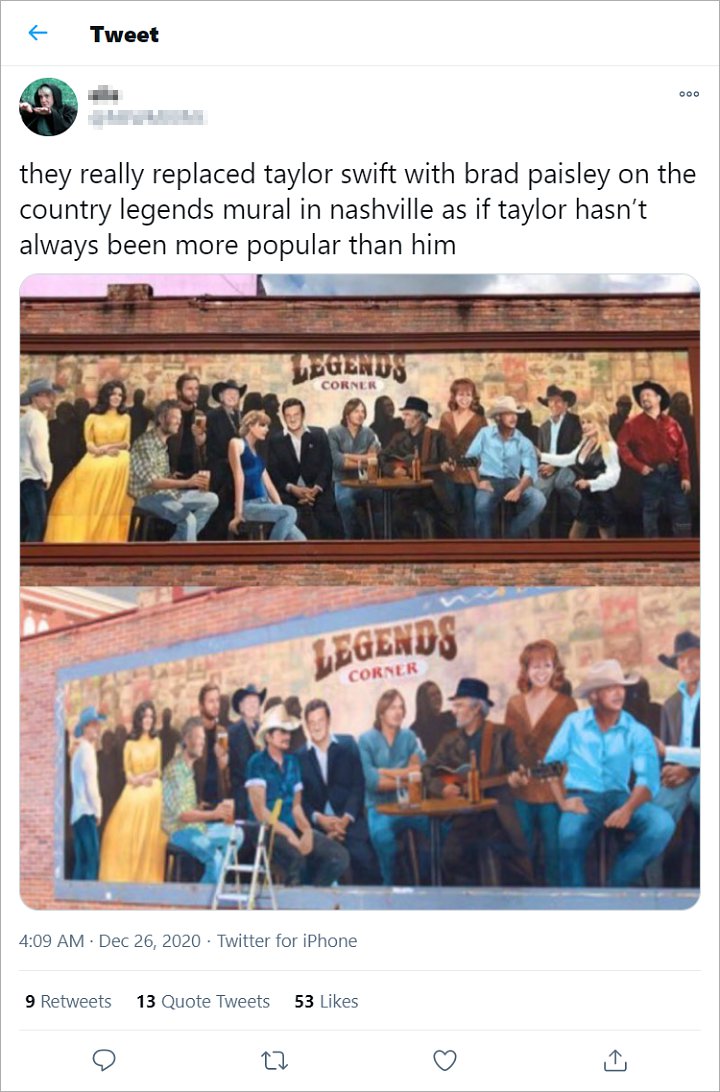 A fan reacted to Taylor Swift being removed from the Nashville mural.
Editors' Pick

Another bewildered fan wrote, "Nashville really just PAINTED OVER @taylorswift13 in the legends corner mural on Broadway... she is a country music legend and so what if she moved over to different genres?? Confused why they didn't just make the mural bigger."

A third one called it "disgraceful," while someone else blasted another person who supported Taylor's removal from the mural. "Sounds like you need to use your time a lot more wisely than to argue that a woman who is extremely successful be erased from a painting that has no impact on your life," the fourth commenter reacted.

Some others, however, agreed that Taylor no longer fits into the lineup of country music legends. "Makes sense to me. She's more popular but she's not really country anymore," one person countered the fan's complaint.

Another explained, "Might want to consider that she is 'was' the only non country artist. Makes perfect sense. If you don't think Brad Paisley is popular then you don't know country." Another agreed, stating, "I think Brad looks better on it."

"She ain't nothing but a city girl," another shaded the "Cardigan" hitmaker. Someone else said of the Pennsylvania-born star, "She graduated from 'Legend' status. Doesn't Brad do auto insurance commercials."