In a new video on the YouTube star's channel, the beauty blogger does the rapper's makeup for the first time in addition to talking about fame, fashion and other topics.

AceShowbiz - Lil Nas X only wants to have fun with James Charles platonically. The "Old Town Road" hitmaker took to his Twitter account to clap back at people who have been leaving negative, sexualizing comments on his recent collaboration with the YouTube star.

In a new video, which James uploaded on his channel on Tuesday, November 17, the beauty blogger did the rapper's makeup for the first time in addition to talking about fame, fashion and others. At one point, they touched on Nas' decision to come out in June 2019.

"Obviously, a few months ago you came out as gay, which was such an exciting headline and I was so excited and proud of you and I feel like a lot of the internet really was behind you and supported you as well," James applauded the Grammy winner. "It was such a like crazy cool thing for the country and the pop and just the music community in general."

Nas admitted that it was "nerve-wracking" decision since he didn't know "what was on the other side." However, he never regretted it and was glad that he went past them all.

James then poked fun at internet trolls over his response to Nas' coming out news. "I remember when you first came out of the closet too. I remember tweeting you to be like, 'Oh my god, congratulations!' And everyone was like, 'He's not gonna f**k you,' " James said, to which Nas jokingly replied, "I'm dead. Let's keep that in the video."

Following the release of the video, people started to talk about the artists' collaboration with most of them sexualizing the two. "two bottoms doesnt make a top," one wrote on Twitter. Another user asked, "who's the top?" Echoing the sentiment, someone else added, "I just know they f***ed after this."

Nas apparently noticed the negativity surrounding his recent interaction with James and decided to clap back. "2 gay men can do things together without y'all sexualizing it," so he wrote on the blue bird app. 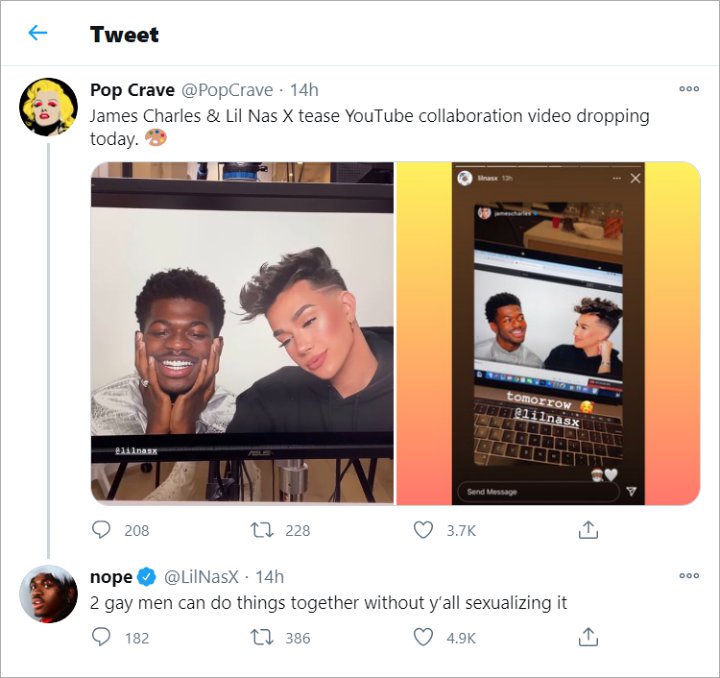 Prior to this, the "Panini" rapper reacted to Angela Stanton-King criticizing his promo photo for "Holiday". The failed Republican congressional candidate from Georgia tweeted, "So this is what black culture is pushing to our youth now? Sex with everything and everyone including yourself? Is lil nas x tonguing himself down? #BlackCulture #MerryChristmas." To that, Nas simply responded, "just say ur turned on and go."