In Robert Kirkman's 'The Walking Dead' comics, Morgan's character Negan was married to a woman named Lucille, whom he was cheating on, before she died from a cancer prior to the zombie apocalypse.

AceShowbiz - An upcoming bonus episode of "The Walking Dead" season 10 will be a family affair for star Jeffrey Dean Morgan. In one of the bonus episodes of the season, the Negan depicter will be joined by his real-life wife Hilarie Burton, according to Entertainment Weekly.

It has been reported that Burton will appear as a guest star, playing Negan's late wife Lucille. Burton herself confirmed the news in a tweet on Tuesday, November 3. "Been pretty hard to keep this a secret. But I love working with @JDMorgan. I love watching him become #Negan and take on that swagger," Burton wrote on the blue bird app. "And I love the @TheWalkingDead family. They've been a part of our family for ages and I'm so grateful for their kindness. Xoxo #hereslucille." 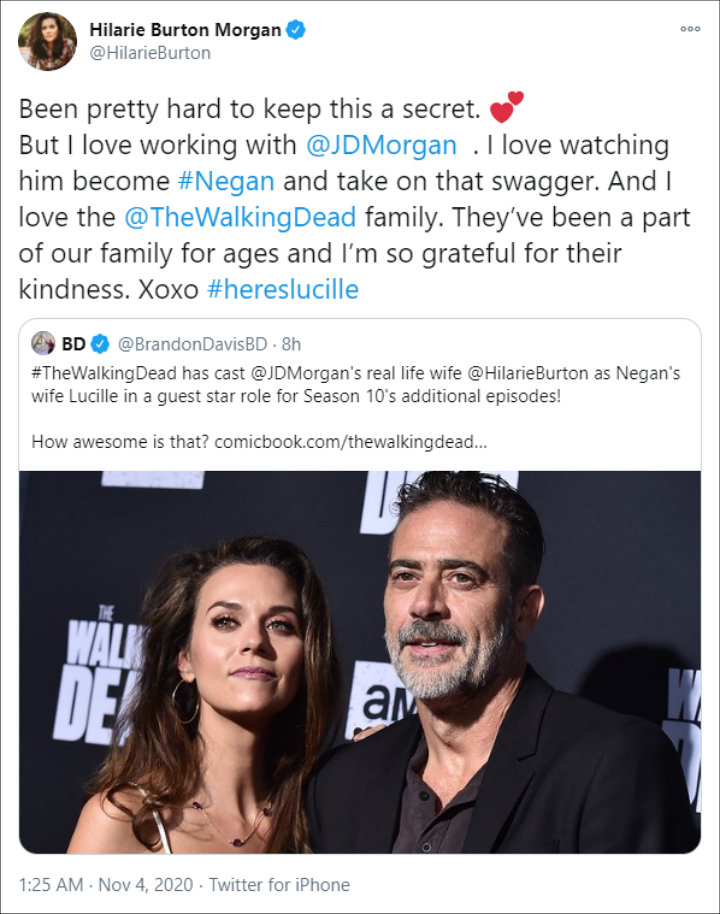 Hilarie Burton confirmed her appearance as Lucille on 'The Walking Dead'.

Burton is known for her role on "One Tree Hill". Her credits also include "The Secret Life of Bees", "Surprised by Love", "Extant" and "Grey's Anatomy".

In Robert Kirkman's "The Walking Dead" comics, Negan was married to Lucille prior to the zombie apocalypse. He was cheating on her with his wife knowing about the affair. However, Lucille's cancer diagnosis changed Negan as he called his affair off because he wanted to spend as much time with his wife as possible.

Lucille eventually died and the end of the world came almost simultaneously. As the zombie virus started spreading, Lucille reanimated as one of the walkers in her hospital bed. He then named his famous weapon, the barbed wire covered baseball bat, after his late wife to pay tribute to her.

Morgan and Burton have been together for over 10 years after she was introduced to Morgan at an Irish pub in Los Angeles by her former co-star Danneel Ackles and her husband, actor Jensen Ackles. The pair eventually tied the knot last October.

Recalling the night when she first met the actor, Burton previously shared, "When he came along, he was so sure of himself." The "Friday Night In with the Morgans" co-host added, "I was not a girl anyone pursued. I've always been alpha. And Jeffrey was like, 'You're going to be my girlfriend.' It was so nice to be pursued. He's a cute dude! And I liked that he knew exactly who he was. His confidence was intoxicating."

Kanye West Votes for Himself, but Kim Kardashian Likes 'Vote for Biden' Tweet