The 'Horrible Bosses' actress previously pleaded with her Instagram followers to 'be responsible' and not to vote for the 'Gold Digger' rapper because 'it's not funny.'

AceShowbiz - Kanye West has responded after Jennifer Aniston warned people against voting for him. Seemingly proud that he's got people anxious with his presidential campaign, the rapper bragged about having such influence on others.

"Wow," the Yeezy designer wrote in a since-deleted tweet. "That Rogan interview got em shook. Let's gooooooooo." He included a screenshot of Vanity Fair's article about Jennifer's plea and her endorsement for Joe Biden. 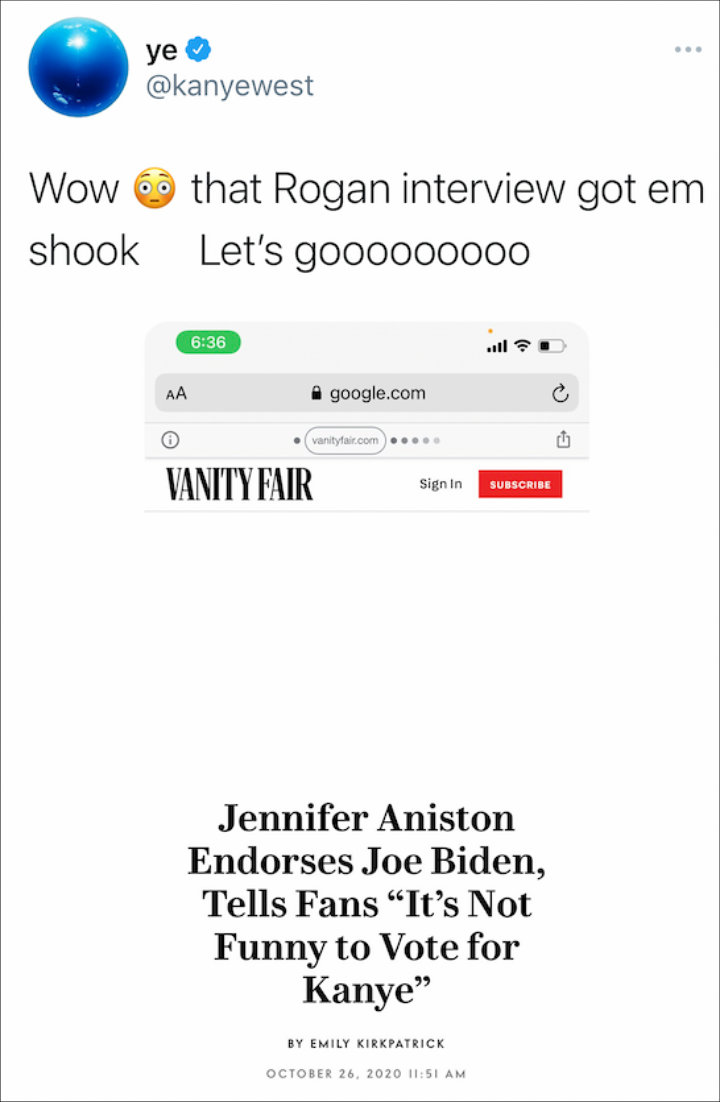 Kanye West reacted to Jennifer Aniston's plea not to vote for him.

Kanye was referring to his appearance on the Joe Rogan podcast, but Jennifer didn't seem to make her statement in regards to the said interview, which is probably why the husband of Kim Kardashian eventually deleted the post.

Kanye previously came under fire after he urged people to write his name on mail-in ballot. Earlier this month, he shared a photo of a ballot with his name written in, despite his name being printed on the page already. "Friends writing me in," he wrote along with the image.

Jennifer, meanwhile, took to her Instagram page on October 23 to remind people to "be responsible" with their voice. Sharing a photo of herself dropping off her mail-in ballot at the official box, she noted in her lengthy message, "It's not funny to vote for Kanye. I don't know how else to say it. Please be responsible."

The "Murder Mystery" star also declared her support for Democratic presidential candidate Joe Biden and his running mate Kamala Harris. "#IVOTED for @joebiden and @kamalaharris," she wrote. "I voted for them because right now this country is more divided than ever."

In another tweet, Kanye confirmed that he's building a "city of the future" in Haiti. "Just to be CLEAR: WE ARE IN ENGAGED WITH HAITI's GOVERNMENT to make a transformational INVESTMENT to bring JOBS, DEVELOPMENT, HELP SUPPORT LOCAL FARMERS and FISHERMEN and Build a new « CITY OF THE FUTURE » in a very beautiful country," so he claimed.

Kanye West Sparks Chatter After Hanging Out With Nick Fuentes