People are accusing the Major Lazer member of grooming the young influencer after finding out a 2010 tweet from the former that reads, 'girls born in the 90s i hav to stop sleepin with u.'

AceShowbiz - Diplo recently made headlines after Quenlin Blackwell confirmed she has been living with the record producer for sometime now. People on social media are unsurprisingly against this idea considering their age gaps, and a tweet Diplo posted ten years ago has made them get more convinced that he's grooming the young influencer.

The tweet in question read, "girls born in the 90s i hav to stop sleepin with u." People found this message problematic given the fact that Diplo should be around 30s when he made the tweet while girls born in the 1990s were supposed to still be in their teenage years. "now I know I didn't do well in math class but the age difference is adding up to be some quite concerning numbers," one pointed out. 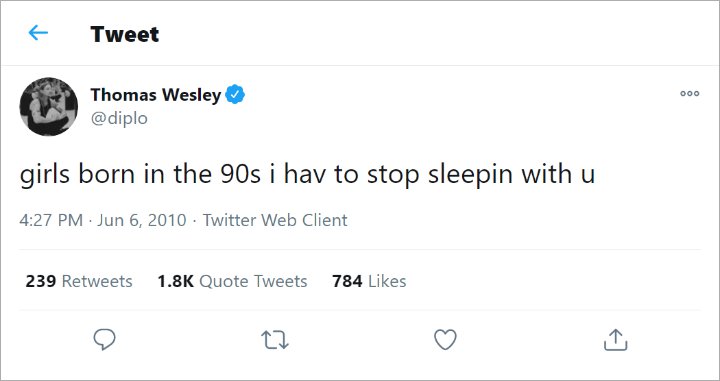 Furthermore, adding the fact that Diplo's ex-girlfriends and baby mamas are mostly black women, online folks get even more convinced that the Major Lazer member is grooming Quenlin, who is also black. However, the social media star has since broken her silence and defended her decision to live with Diplo. She also shut down accusations that the DJ is grooming her.

"I'm an adult. I'm not being groomed. Platonic relationships exist. I've been living here for over a year...I'd rather break both of my legs and be forced to walk than pursue Diplo romantically and he'd rather choke," she said on her Twitter account. "He's barley (sic) in L.A. bc he's so busy." 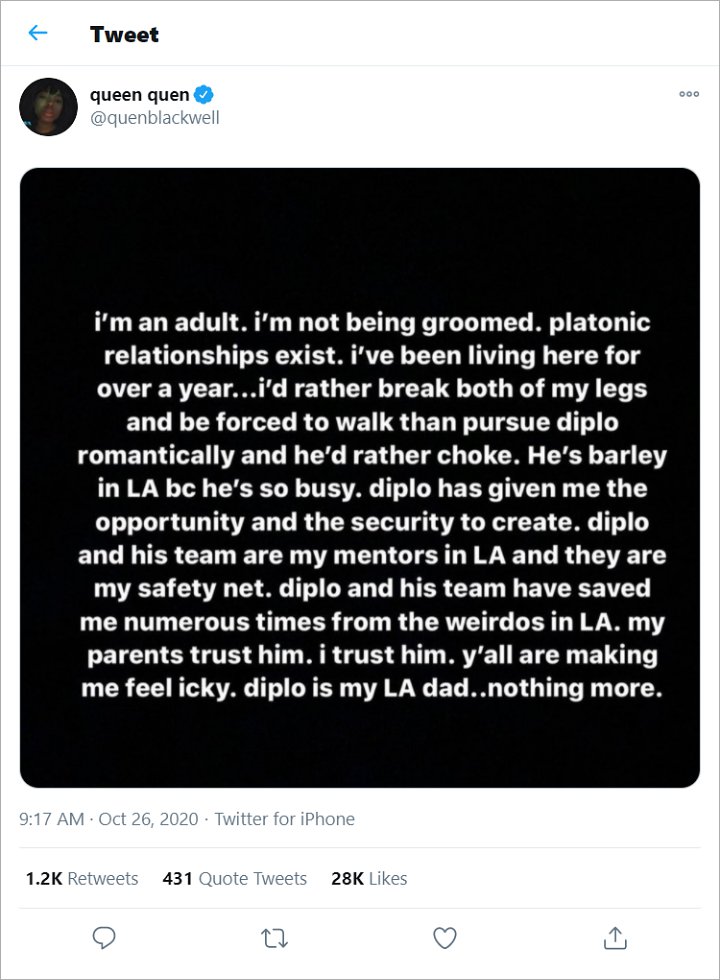 Quenlin continued defending her pal by saying, "Diplo has given me the opportunity and security to create. Diplo and his team are my mentor in LA and they are my safety net. Diplo and his team have saved me numerous times from the weirdos in LA. My parents trust him. I trust him. Y'all are making me feel icky. Diplo is my LA dad...nothing more."

Teen Living in Diplo's House Claims He Kicks Her Out