The 'A Simple Favor' actress trolls her husband, who just turned 44, for choosing a pie as his birthday cake and eating it 'without first blowing out the candles.'

AceShowbiz - Blake Lively continues the tradition of trolling her husband Ryan Reynolds on his birthday. The Canadian-born actor turned 44 years old on Friday, October 23 and to mark the special day, the "Gossip Girl" alum shared a hilarious Instagram post in which she called him a "lost soul" and "ANIMAL."

"1) Who is the lost soul that selects birthday PIE. 2) What ANIMAL eats their cake (pie) without first blowing out the candles," the 33-year-old actress wrote along with a picture of Ryan looking moved when being presented with his freshly-baked birthday pie.

In the second slide, the mother of three shared a snap of some pies with only one having lit candles on it. "@vancityreynolds that's who. Happy Birthday," she added in the caption. Alluding that she's in disbelief she could put up with his antics all this time, she joked, "I honestly can't believe we're still married."

Fans took to the comment section to share their amusement at the couple's never-ending banters. "You two have the exact same sense of humor and it's legit perfect," one wrote. Another chimed in, "Your caption . Happy birthdayy !" while a third user gushed, "You guys are the funniest I love your humor together."

Ryan's best friend and fake nemesis Hugh Jackman has also taken to his Instagram account to congratulate the "Deadpool" star on his birthday. Sharing a throwback photo of a teenage Ryan playing the drums, "The Greatest Showman" actor wrote, "Happy birthday lil' buddy."

Meanwhile, Ryan, who shares the same birthday with Emilia Clarke, isn't willing to share the spotlight with the British actress. In a one-sided decision, he wrote on his Twitter account, "So sorry. I moved her birthday this year. It was feeling a little crowded for me." He further trolled the "Game of Thrones" alum as declaring, "Excited to announce February 29th as Emilia's new birthday. Congratulations!" 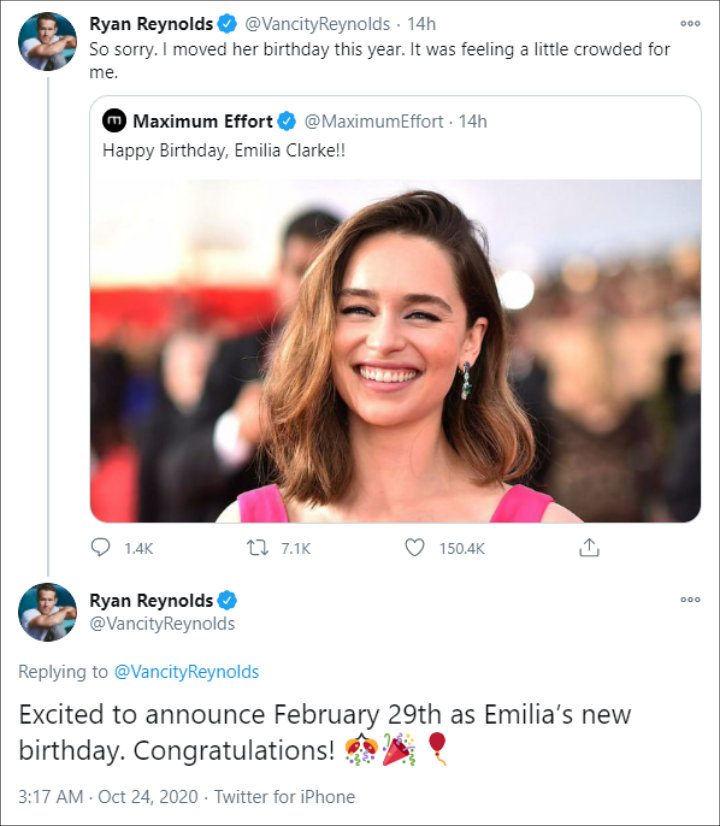 Emilia herself hasn't responded to Ryan's tweets as she's probably busy celebrating the day with some adrenaline-rush activities. She posted on Instagram some pictures of her going skydiving on Friday, writing below the images, "What could match the profound existential terror of another birthday? Jumping out of a goddamn plane is what."

'RHOC' Star Braunwyn Windham-Burke Stresses She's the Gay One, and Not Her Husband