Acknowledging that the late Van Halen member was an amazing guitarist, the Crosby, Stills and Nash founder admits to being dubbed 'an old idiot' by the younger members of his family.

The Crosby, Stills & Nash star dismissed the Van Halen rocker by saying, "Meh," when a fan asked him for his thoughts on the "Jump" hitmaker after his passing from cancer and later tried to explain his "not cool" comment by telling social media followers he had forgotten Eddie had died, and perhaps should have said nothing.

Crosby has now returned to Twitter to explain he has truly learned the error of his ways, thanks to members of his family.

"I am reliably informed by the younger members of my family that I am an old idiot and Van Halen was one of the next (sic) guitarists to have ever lived," he wrote, later clarifying he meant "best guitarists," blaming a spellchecker for the error.

David Crosby recalled what his family thought of him over his Eddie Van Halen tweet.

"He was an amazing guitarist but I didn't know that. Truth is I never ever listened to that band so I was completely ignorant. No insult intended. I never listened to any of the big pop rock bands. I didn't even own a Led Zep record and they could write." 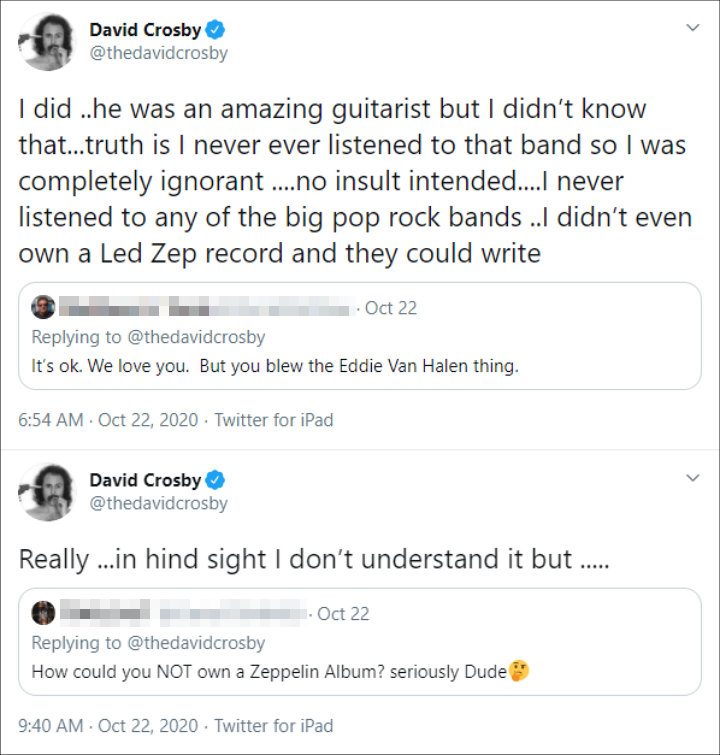 David Crosby responded to fans' comments to his online apology.

That remark drew comments from Led Zeppelin fans, with one asking, "How could you not own a Zeppelin album?" Crosby replied, "Really in hindsight I don't understand it but...."

Crosby previously doubled down on his comment on Van Halen despite the backlash, responding to the critics on Twitter, "Hendrix changed the world of guitar. Nobody else really ...look I get it ..many of you loved Van Halen ....and the one time I met he was nice ....and he was talented ...meh to me means I don't care that much ....and I don't ...doesn't mean he wasn't good ,he was but not for me."