The former N.W.A member also responds to the radio host who questions his qualification to give advice on policy development and legislation to the Trump administration.

AceShowbiz - Ice Cube is hitting back at D.L. Hughley over criticism about the rapper's works with the Trump administration. The two have engaged in a back-and-forth on Twitter after the comedian called him out for assisting Donald Trump's team in his reelection campaign with his Contract with Black America (CWBA).

Speaking up against Cube's move, Hughley retweeted an article from Politico titled "The inside story of how Ice Cube joined forces with Donald Trump". Disagreeing with the headline, the former N.W.A member responded, "Joined forces? Stop pushing these bulls**t headlines."

Hughley also shared an article from Medium criticizing the "It Was a Good Day" spitter. To this tweet, Cube replied simply with a middle finger emoji.

On his radio show, Hughley further talked about why he doesn't support Cube in his efforts to solve issues in black community. Suggesting that Trump is only using Cube for photo-ops, the political commentator called it "insulting."

He went on questioning Cube's qualification to give advice to the Trump administration on policy development and legislation. "Yes, we need to be in the room," he remarked, "But it needs to be the right people in the room."

Seemingly responding to this statement, Cube later posted on his Twitter page, "I hope all these people with podcast and radio shows telling the world I'm too unqualified and uneducated to talk about a document I created, don't get asked to pull out their Communications degrees and show you they are qualified and educated enough to speak to you over airwaves."

But Cube's tweet was disputed by Dr. Avis, who is an expert in the black community issues. Laying out her credits which included "Ph.D. in Political Science. Worked in MD & OH State Legistures, Gov Office of VA & Congressional Black Caucus Research & Policy Instutute (sic). Spoken on Capitol Hill & written numerous policy briefs focused on crafting legislation to benefit Black people," she reminded the 51-year-old star of his actual job, "You play policy expert on TV." 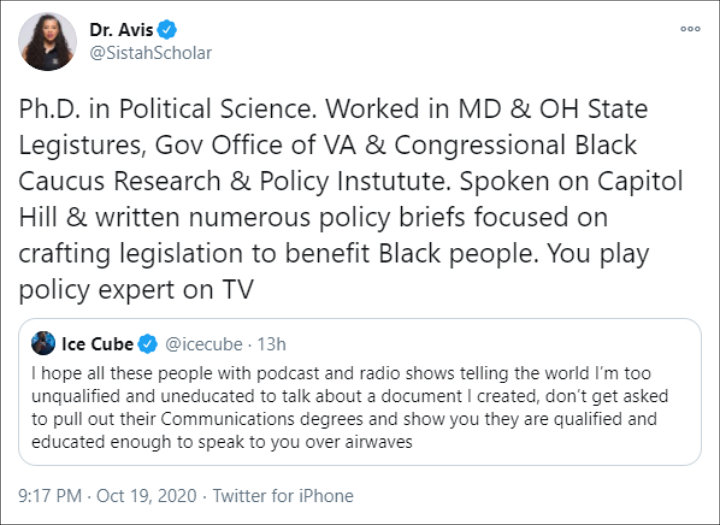 Cube, however, apparently still finds support in other Twitter users. "Thanks for all the true understanding and support. It's good to see so many people dedicated to the truth," he wrote back to them.

Cube is under fire after one of the president's staffers, Katrina Pierson, confirmed his involvement with the Trump campaign. "Shoutout to @icecube for his willingness to step up and work with @realDonaldTrump Administration to help develop the #PlatinumPlan," she tweeted on Wednesday, October 14. "Leaders gonna lead, haters gonna hate. Thank you for leading!"

Cube later explained why he decided to work with Trump's team. "Facts: I put out the CWBA. Both parties contacted me. Dems said we'll address the CWBA after the election," he stated in his post. "Trump campaign made some adjustments to their plan after talking to us about the CWBA."

When someone asked him about how Trump's Platinum Plan will help black people, Cube couldn't give the answer though. "You don't understand why I don't know Trumps plan like the back of my hand?" he defended himself. "It's his plan. My plan is the Contract With Black America. Compare the two for yourself and see what they took. I was prepared. I had the plan right there but I felt like I shouldn't be defending his plan by going point by point. That's on him not me."