A representative for 'The Way We Were' actor says that the 84-year-old acting vet 'is mourning with his family during this difficult time' after James' wife Kyle Redford confirmed his passing.

AceShowbiz - Robert Redford is dealing with a great loss. The acting vet is mourning the death of his son, filmmaker and activist James Redford (also known as Jamie), who passed away at age 58 over the weekend after battling liver cancer.

In a statement to PEOPLE, a rep for the 84-year-old actor, Cindi Berger, says that he "is mourning with his family during this difficult time and asks for privacy." She adds, "The grief is immeasurable with the loss of a child."

Cindi goes on paying tribute to James in the statement, "Jamie was a loving son, husband and father. His legacy lives on through his children, art, filmmaking and devoted passion to conservation and the environment."

James died on Friday, October 16 from bile-duct cancer in his liver. His wife Kyle Redford confirmed the sad news via Twitter last week, writing, "James died today. We're heartbroken. He lived a beautiful, impactful life & was loved by many."

Sharing pictures of her late husband, the grieving widow continued, "As his wife of 32 yrs, I'm most grateful for the two spectacular children we raised together. I don't know what we would've done w/o them over the past 2 yrs." 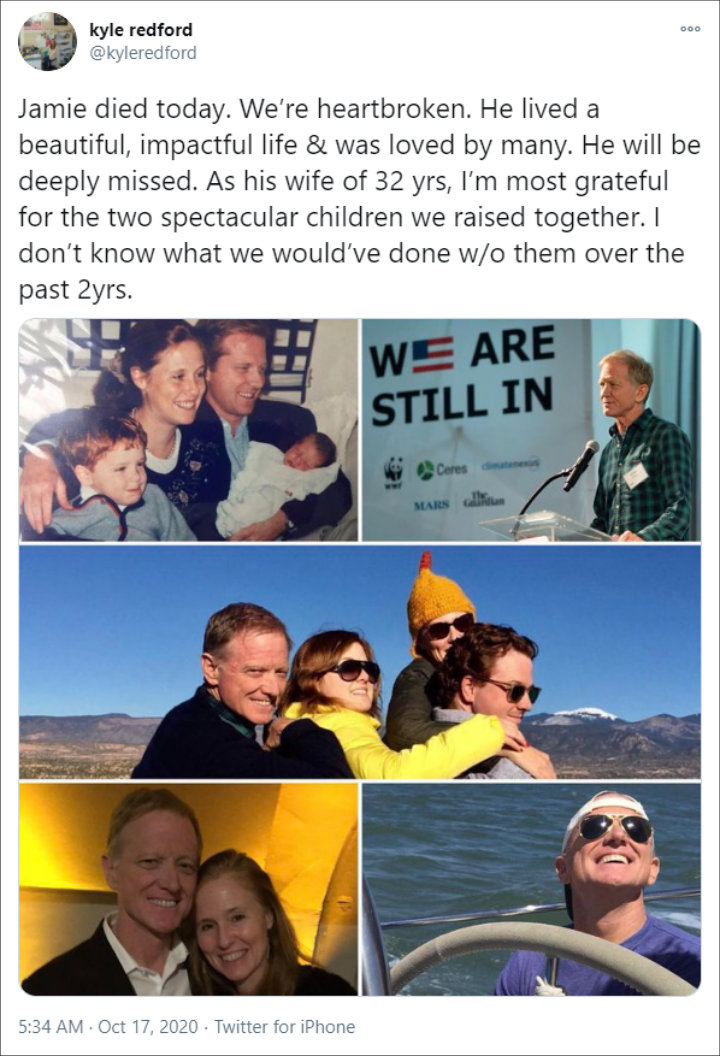 Speaking to The Salt Lake Tribune on Monday, Kyle said her husband's liver disease returned two years ago and the cancer was discovered in his bile duct last November while he was awaiting a liver transplant.

James, who followed in the footsteps of his father as a filmmaker and philanthropist, knew that people expected him to be like his father. "I've grown up with a sense that there's always a preconception," he told The Tribune in 2003. "Over time, I've just learned to shrug it off. ... I just am who I am."

James is Robert's third child with his ex-wife Lila Van Wagenene. He struggled with health problems since his childhood, receiving two liver transplants in 1993 after being diagnosed with Primary Sclerosing Cholangitis, a rare autoimmune disease affecting the liver.

He founded the James Redford Institute for Transplant Awareness, a nonprofit created to educate the public about organ and tissue donation. Together with his father, he also co-founded The Redford Center in 2005, a nonprofit focusing on producing films and providing grants to filmmakers who direct films that touch on climate change and the environment.

In filmmaking, James' work was mostly focused on documentaries, usually about the environment and health, and where they intersected.

He is survived by his wife Kyle and their two children, Dylan and Lena.