The 'It Was a Good Day' rapper declares he hasn't endorsed 'anybody' after he's called out by a Twitter user who reminds his previous pledge that he would never endorse Donald Trump.

AceShowbiz - Ice Cube has clarified his political stance after receiving backlash for assisting Donald Trump's team in his reelection campaign with his Contract with Black America (CWBA). Despite working together with the president's team to develop what is dubbed "the Platinum Plan," the rapper denies that he's endorsing Trump as a president.

The 51-year-old made this clear after a Twitter user reminded him of his plea in the past that he would never endorse Trump. Sharing a screenshot of Cube's old tweet that read, "I will never endorse a mothaf**ka like Donald Trump! EVER!!!", the said person wrote to him, "ice cube once said EVER.... do you remember?" Cube then replied to the said tweet, "I haven't endorsed anybody." 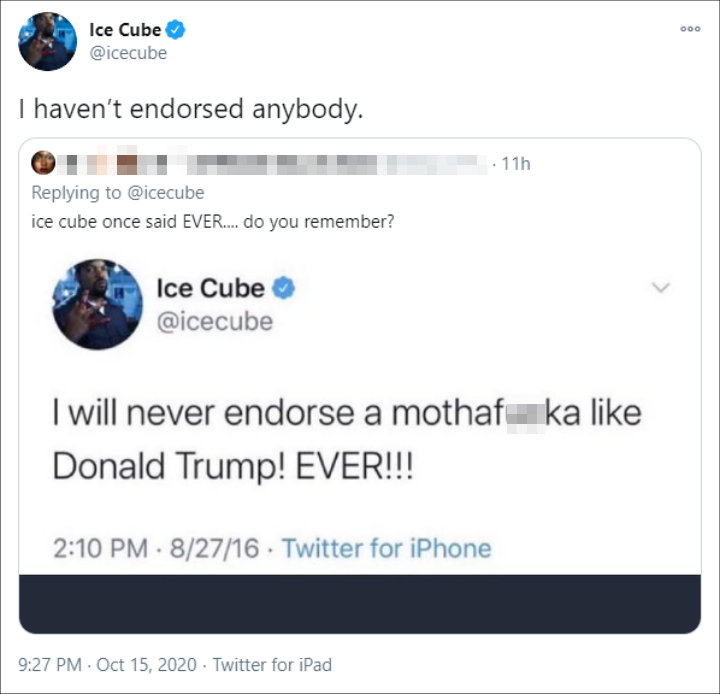 Cube also responded to The Washington Post's tweet which suggested he's a hypocrite for working with Trump. "Ice Cube once rapped about arresting Trump. Now he's advising the president on policy plans," the publication wrote. Defending his decision, the N.W.A co-founder said, "I will advise anybody on the planet who has the power to help Black Americans close the enormous wealth gap." 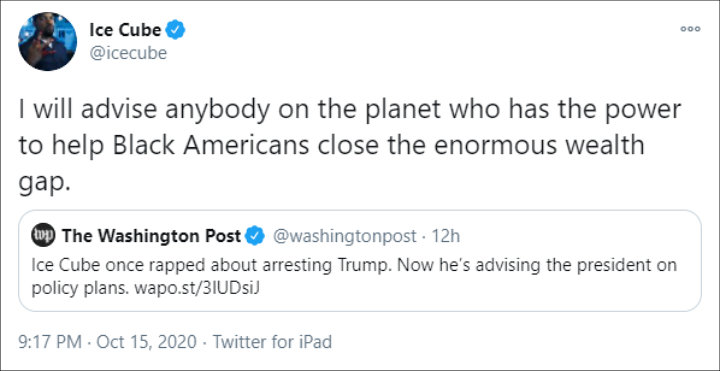 In another tweet, Cube revealed his interview with Chris Cuomo, which was scheduled for Thursday night, October 15, has been canceled and that he has been banned from appearing on CNN for the past few months. "So the POWERS that be cancelled my interview on @CuomoPrimeTime tonight. I've actually been ban from @CNN for a few months so I was surprised they even asked. But it seems like they can't handle the truth," so he claimed.

So Cube turned up on "Roland Martin Unfiltered" instead to further explain why he's assisting Trump's team with his CWBA. Saying that he doesn't care if he's used politically by Trump as opposed to what really happens, he stated that what matters to him is the CWBA and how to make sure his proposals are going to be implemented.

Cube's involvement with the Trump campaign was confirmed by one of the president's staffers, Katrina Pierson, who tweeted on Wednesday, October 14, "Shoutout to @icecube for his willingness to step up and work with @realDonaldTrump Administration to help develop the #PlatinumPlan." She added in her tweet, "Leaders gonna lead, haters gonna hate. Thank you for leading!"

Following Pierson's tweet, Cube took to his own Twitter page to explain that he was approached by both Trump and Biden's teams about the CWBA, but he ultimately went with Trump's offer because the former is willing to act sooner than the latter.

"Facts: I put out the CWBA. Both parties contacted me. Dems said we'll address the CWBA after the election," he stated in his post. "Trump campaign made some adjustments to their plan after talking to us about the CWBA."

He later responded to a person who said he's working with "the Darkside." "Every side is the Darkside for us here in America," he wrote back to the said user. "They're all the same until something changes for us. They all lie and they all cheat but we can't afford not to negotiate with whoever is in power or our condition in this country will never change. Our justice is bipartisan."

Chris Sails Not Expecting Daughter With Jordyn Alexis: 'It Was a Prank'