'Good Morning Britain' host Piers Morgan accepts the boxing champion's explanation of his slurred speech and 'weary' look during the live TV appearance on his show.

AceShowbiz - Mike Tyson has addressed his bizarre TV interview after sparking concern about his health. Viewers and fans were left confused after the boxing champion slurred his words and leaned forward during his appearance on "Good Morning Britain" on Tuesday morning, October 13 local time and now he tried to easy people's worry by posting a statement on Twitter.

Blaming the different time zone between the United States and the U.K., the 54-year-old former athlete admitted that he was tired and tried to stay up late for the interview, but failed. "Hey mate @piersmorgan @GMB @susannareid100 and UK," he opened his message, extending his apology to the show's host Piers Morgan and co-host Susanna Reid.

"I tried to stay up late for interview but fell asleep and like a lion I'm hard to wake once asleep," he explained. "Training hard and going to bed early. I had no monitor so I couldn't see you guys and forgot to look into camera."

Piers has responded to Mike's tweet and appreciated that he took time to explain the bizarre interview. "No problem, Champ," the TV personality replied to Iron Mike's tweet. He went on acknowledging that the interview could be hard for Mike to endure due to the different time zone, adding, "We could see you were a bit weary! It was very late in LA. Appreciate this message as some viewers were concerned." 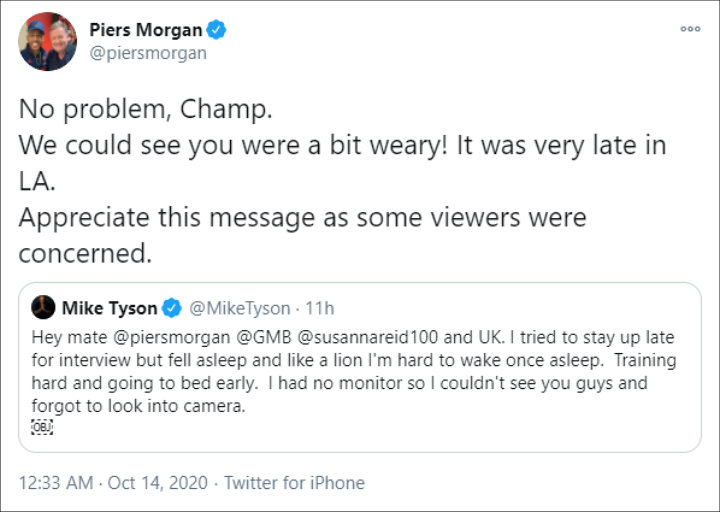 Mike joined Piers and Susanna on "Good Morning Britain" virtually to discuss his upcoming exhibition match against Roy Jones Jr. He, however, failed to give coherent answers to the questions most of the time. He even closed his eyes and dropped his head for several seconds when the interviewers gave the questions.

At one point, when asked about people's concern that he and Roy are fighting in their 50s, Mike said instead, "I think it's very wonderful that we are fighting together, it's a fight we should have had sooner, but unfortunately we are having it now, and that's going to be awesome."

"What is going on with Mike Tyson? Tired, Punch Drunk or too much Charlie?" one of the confused viewers asked on Twitter. Another remarked, "Wow Mike Tyson on #GMB this morning looked punch drunk," while someone else commented on Mike's disoriented look, "Had he got rid of his demons yet ? #Piersmorgan."

Mike Tyson Gets Yelled at by Crazy Fan After Drawn Match Against Roy Jones Jr.