'Jurassic World: Dominion' Director Assures One-Year Delay Will 'All Be Worth It'

Colin Trevorrow redeems the release push-back by sharing a new poster, after Universal Pictures announces that the Chris Pratt-starring movie will not arrive until 2022.

AceShowbiz - "Jurassic World: Dominion" is the latest movie which release date has been affected by COVID-19. After the virus outbreak shut down the production earlier this year, fans now have to wait a little longer for the film to arrive in theaters.

Universal Pictures announced on Tuesday, October 6 that the third "Jurassic World" movie is now no longer scheduled to open in theaters in 2021. Originally scheduled to arrive on June 11, 2021, the follow-up to 2018's "Jurassic World: Fallen Kingdom" is practically pushed back one year to June 10, 2022.

Director Colin Trevorrow also took to Twitter to address the shift in the release schedule. Promising that the long wait will be "worth it," he wrote, "For the past three months, I've worked with an extraordinary cast and crew on a film we can't wait to share with the world. Even though we'll have to wait a bit longer, it will all be worth it. Let's stay healthy and take care of each other until then."

In the meantime, he quenched fans' thirst with the first tease poster for "Dominion". The artwork features the familiar "Jurassic" logo encased in glowing amber, a callback to the first original film in the franchise, 1993's "Jurassic Park". 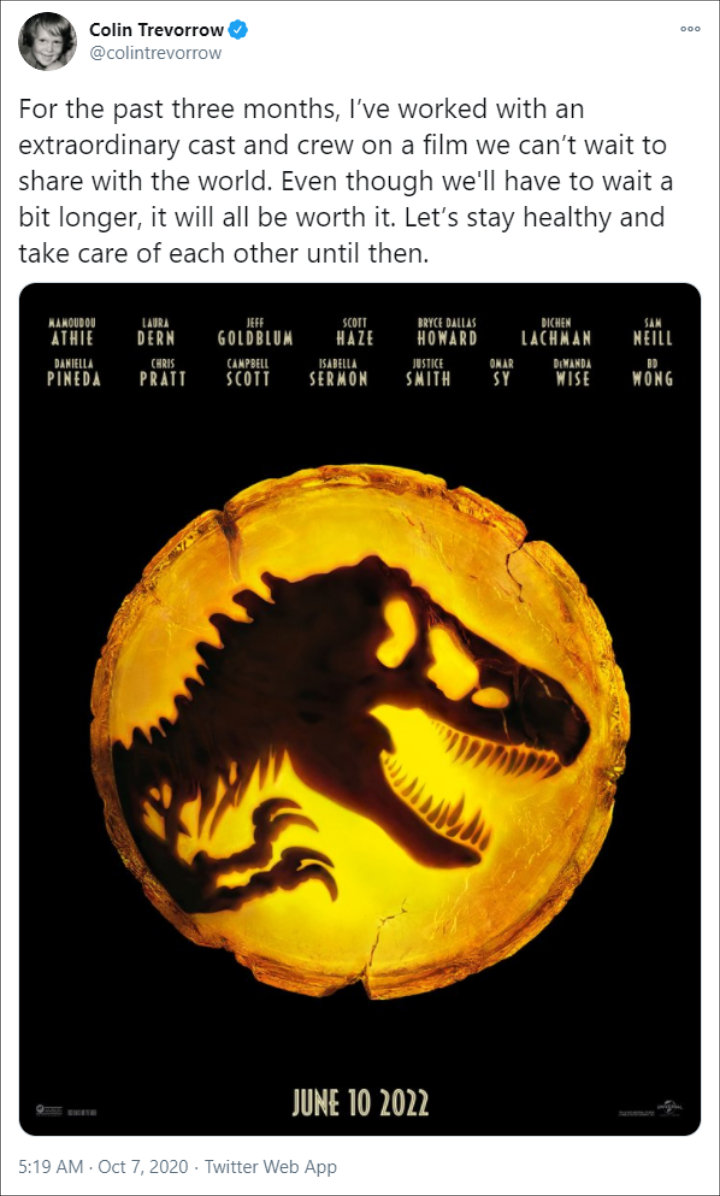 "Jurassic World: Dominion" had been filming since February of this year when the global pandemic shut down production of Hollywood movies in March. Filming resumed in July, with the cast and crew heading to London.

Just days after the production resumed in the U.K., reports emerged that filming had to be delayed again after several crew members tested positive for coronavirus. However, the reports were debunked by Universal.

"Any reports indicating that 'Jurassic World: Dominion' has halted production are categorically untrue," said a spokesperson for the studio, without confirming nor denying the claim about the crew members who tested positive for coronavirus. "The production is in its fifth day of shooting today, and we're thrilled to be back in front of the camera on this incredible project."

"Jurassic World: Dominion" has Chris Pratt reprising his role as Owen Grady and Bryce Dallas Howard returning as Claire Dearing. The movie also brings back some of original stars from the "Jurassic Park" trilogy, including Jeff Goldblum, Sam Neill and Laura Dern.