Many people are not having it after the social media star takes to her Twitter account to jokingly asks her nearly-two-million followers, 'What race is Nikita gonna be today.'

AceShowbiz - Nikita Dragun became the subject of cyberbullying over the weekend due to what she said on her Twitter account. People were not having it after the social media star jokingly asked her followers what race she should be today, leading many of them to attack Nikita though she did not back down easily just like that.

Her "What race is Nikita gonna be today" tweet has been retweeted thousands of times on the blue bird site, with more than 15,000 people using the quote-retweet function to slam Nikita. For instance, one reacted to the Sunday, October 4 post by saying, "can this girl shut up and right before a collab with a bunch of other women too like ummm can u at least try to make urself likeable."

Some people told her that she should keep this kind of post in the drafts, while some others made it clear that her joke was not funny in the slightest bit. There was also someone who commented, "You'll come across the dumbest f**king tweet you've ever seen--oh wait here it is." Another person, meanwhile, wrote, "black fishing isn't a joke stop mocking it and stop wanting to be black, people like you want to be black so bad until your treated like a black person give yourself a reality check."

Rather than apologizing, Nikita defended herself following the backlash. "i know it's a joke to comment on my race but i'm really tired of having to defend myself on every post. 'she's hispanic today' i'm hispanic everyday. my mom is mexican. my dad is asian. i'm mixed. the end. Bye," she wrote. 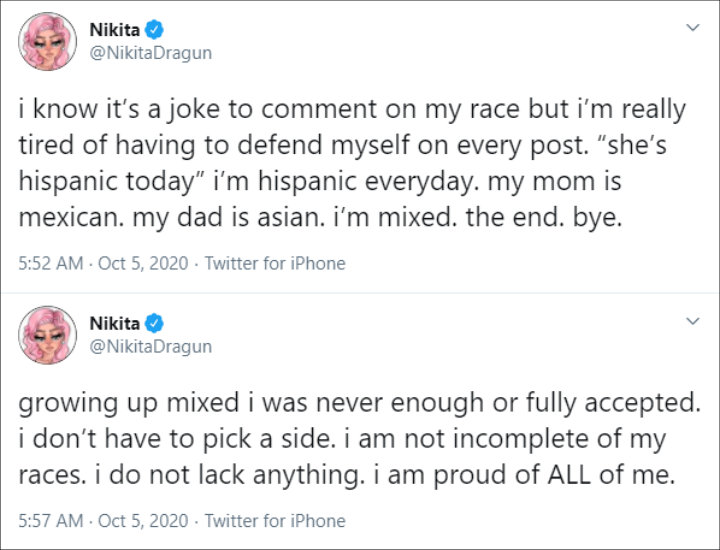 Still having things she needed to say, Nikita added in a separate tweet, "growing up mixed i was never enough or fully accepted. i don't have to pick a side. i am not incomplete of my races. i do not lack anything. i am proud of ALL of me."

This is Nikita Dragun's Response to Saweetie Shading Her