The cosmetics mogul shares a photo and a video of her two-year-old daughter bouncing happily while carrying the $12,000 Hermes backpack as she's about to start homeschooling.

AceShowbiz - Kylie Jenner has once again sparked an online chatter with her social media posts. The reality TV star's daughter Stormi has just started homeschooling and the proud mom couldn't help sharing a picture and video of the little girl on her first day of school.

In the image posted on the 23-year-old's Instagram Stories, Stormi looked adorably chic in a black ensemble and white shoes while carrying a baby pink backpack. Kylie wrote over the picture, "First day of home schoooooool!" 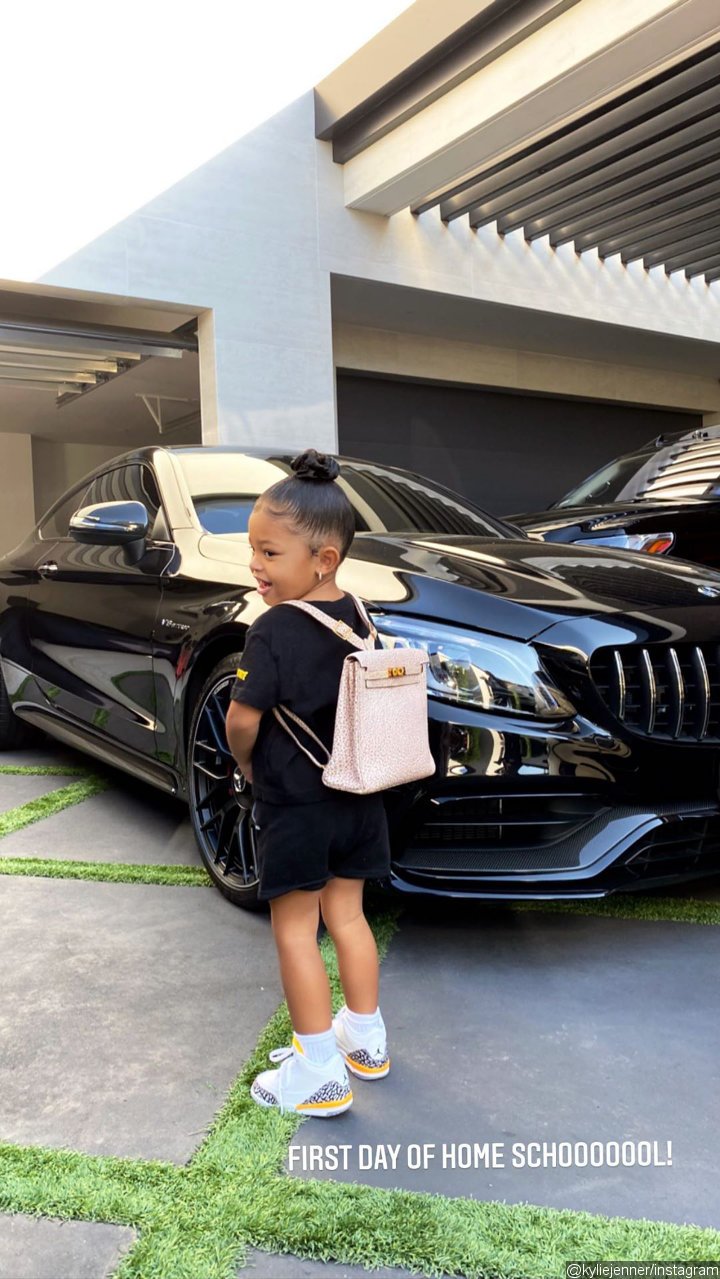 Stormi carried a Hermes bag on her first day of home school.

Meanwhile, the video captured Stormi's excitement as she bounced happily in the ensemble while standing in between Kylie's two luxurious black cars. Kylie's ex and baby daddy Travis Scott (II) was briefly glimpsed in the clip and he appeared to smile to see his daughter.

While documenting a kid's first day of school is something common for parents, Stormi's bag proved to be too much of a distraction to Kylie's fans and followers. Noticing that the little girl got Hermes Taurillon Clemence Kelly Ado Backpack that's worth $12,000 for her first day of school, people couldn't hide their shock at how pricey the bag is.

"not stormi wearing a birkin to first day of school," a jealous person wrote on Twitter. Another pitied her/himself, "stormi wearing $12K birkin to her preschool and i'm still wearing the same rm30 (probably around $7) backpack to uni for almost 3 years now ... argh i hate being broke."

"Stormi Webster's Hermes Birkin backpack is worth more than my entire life," another user quipped. Another poked fun at her/himself, "Kylie sent stormi off to school in a birkin bookbag, my broke a** didn't even know those existed."

"Stormi could slap me with her birkin and i'd say sorry," another joked, while someone else enthused, "Stormi has a birkin back pack??? Bro I was not born into the right family." One other person wished "I was Stormi Webster," adding, "Imagine being 3 yrs old and your only worry is which Birkin to carry today."

Stormi has previously shown her love for a Hermes bag. In April 2019, Kylie shared a video of the toddler walking around while carrying a mini pink Birkin bag. "She won't let go of that purse," so the Kylie cosmetics founder captioned the clip.