Directed by 'The September Issue' filmmaker R.J. Cutler, 'Billie Eilish: The World's A Little Blurry' chronicles the 'Bad Guy' hitmaker's meteoric rise to fame and the huge success of her debut album.

AceShowbiz - Pop sensation Billie Eilish has been given the documentary treatment for a new feature-length film set to hit theatres in February (21).

"Billie Eilish: The World's A Little Blurry" was directed by "The September Issue" filmmaker R.J. Cutler and chronicles the 18-year-old's meteoric rise to fame and the huge success of her Grammy-winning debut album, "When We All Fall Asleep, Where Do We Go?".

The singer shared a 30-second teaser for the project, which will also be streamed online, on social media on Monday (September 28), and captioned it, "The documentary film about Billie Eilish, titled 'Billie Eilish: The World's A Little Blurry' and directed by RJ Cutler, will be released in theaters and on Apple TV+ in February 2021."

Meanwhile, Cutler announced the news to his Twitter followers too, and added, "So thrilled! Yay @billieeilish and @AppleTV!" 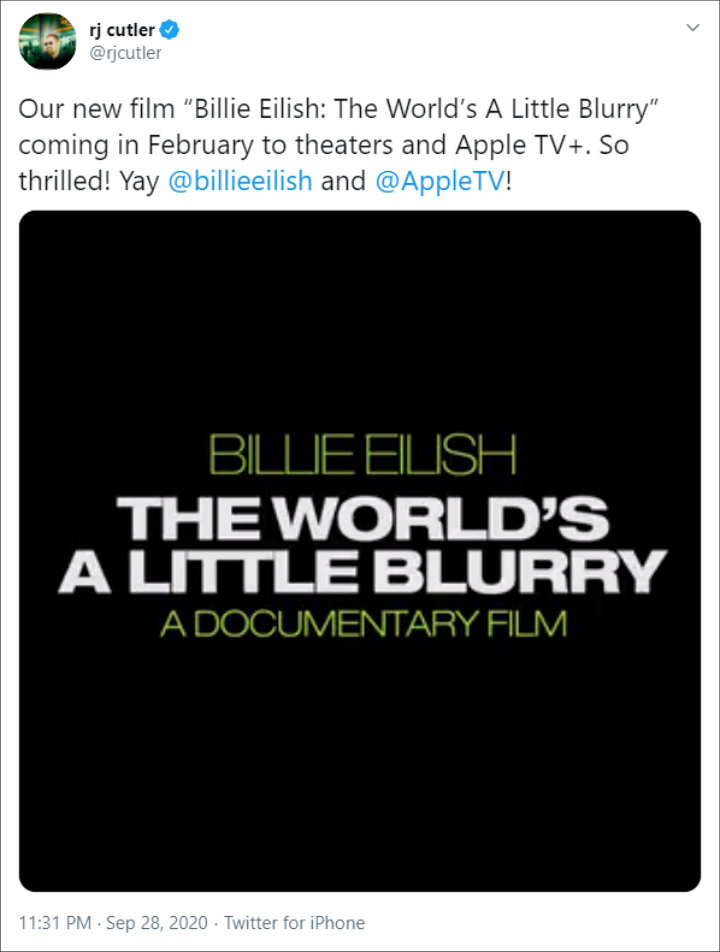 He is no stranger to high-profile documentary subjects - his first film, the Oscar-nominated "The War Room", took viewers behind the scenes of Bill Clinton's 1992 presidential campaign, while his other releases include 2009's "The September Issue", with Vogue Editor-in-Chief Anna Wintour, and 2020's "Untitled John Belushi Biopic", about tragic comedian John Belushi.

Back in December 2019, Deadline reported that Apple nabbed the Billie Eilish documentary for an eight-figure deal. In January of this year, it was announced the "Bad Guy" hitmaker would perform the title track of James Bond upcoming movie "No Time to Die". The single of the same title was released on February 13.