Following reports that the 'Bodak Yellow' hitmaker is divorcing her husband of three years, many social media users speculate that she wants to end her marriage because he was caught in a gay relationship.

AceShowbiz - A new speculation arises on Offset's sexuality amid his split from Cardi B. After news broke that the Bronx femcee has filed for divorce from her husband of three years, people are suspecting that the Migos member is gay.

The rumors that Offset was interested in men first surfaced last year after his Twitter account posted messages which read, "I lick a** cheeks," "I'm gay y'all" and "Balls in my face." The "Ric Flair Drip" rhymer claimed at the time that his Twitter account was hacked, but some people have brought the tweets up to support their claim.

"I heard its cause offset is gay," one person weighed in on the possible reason why Cardi wants to end her marriage to the 28-year-old rap star. "Isn't Offset gay though?" another asked for confirmation, while posting a screenshot of the old "gay" tweets. 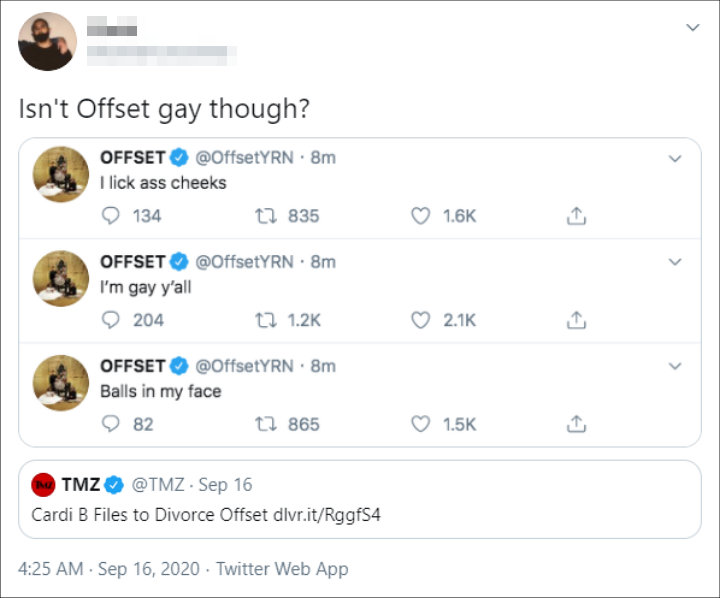 "the real reason cardi is divorcing offset," another claimed with the same "evidence," while a confused user asked, "and offset is like the most hoody-manly n***a ever and he's gay??"

Despite the seemingly scandalous reason, a source explains that Cardi and Offset's relationship has been strained, especially during the COVID-19 quarantine. "Cardi and [Offset] never lived together for more than just a few days. Now they were together for months, and it's tough," the source tells MTO News.

Another source, meanwhile, previously told PEOPLE that Cardi has had enough of Offset's infidelity. While she had forgiven him for his past affair, she reportedly made the decision to call it quits after he's recently caught cheating again.

"Offset has pretty much cheated the entire time [they've been together], but Cardi looked the other way because of the baby," the source claimed, adding, "She also didn't want to be embarrassed. But she's had enough."

Cardi filed the divorce papers in Fulton County, Georgia, on Tuesday, September 15. While the documents state that she is asking for legal custody and primary physical custody of her 2-year-old daughter Kulture with Offset, it's later said that she would amend the papers to make it sound less contentious because she wants an amicable divorce.

Offset Admits He's 'Stressed Out' Due to Cardi B Divorce