The pregnant 'Bring the Funny' judge affirms the 'Keeping Up with the Kardashians' star's claim that the undergarments are made 'to support' weight, asking the critics, 'What's the big deal?'

AceShowbiz - Chrissy Teigen has Kim Kardashian's back amid backlash over her SKIMS maternity line. Shortly after the "Keeping Up with the Kardashians" star found herself being accused of trying to make pregnant women look skinny, the "Bring the Funny" judge came to her defense by raving over her new shapewear collection.

Sharing a series of videos on Instagram Story, the 34-year-old model first explained why she loves the undergarments. "Actual pregnant person here," she began her argument to support her reality star friend's products. "Basically, the reason I love pregnancy shapewear is because it stops all the folds of my vagina and stomach from eating any other type of underwear."

"When you're pregnant and you're sitting down a lot, or on bed rest like me, you tend to just sit there, and if you're wearing regular, basic-a** underwear, all it does is roll inside of folds I didn't even know I had," the wife of John Legend continued. "It rolls up in there and it doesn't even look like I have underwear on." She further assured, "We're not trying to do anything to trick you, we're pregnant."

The expectant mother then argued, "We would just like to feel good about ourselves in a time where mentally, it can be really challenging. What's the big deal?" She added, "I don't think I have some f**king magic waistline now. Do you guys think that? I'm not doing it to get a waistline. I merely want to wear underwear that's pretty, that I feel good in, that's soft, that's comfortable, that stretches nicely over my belly." 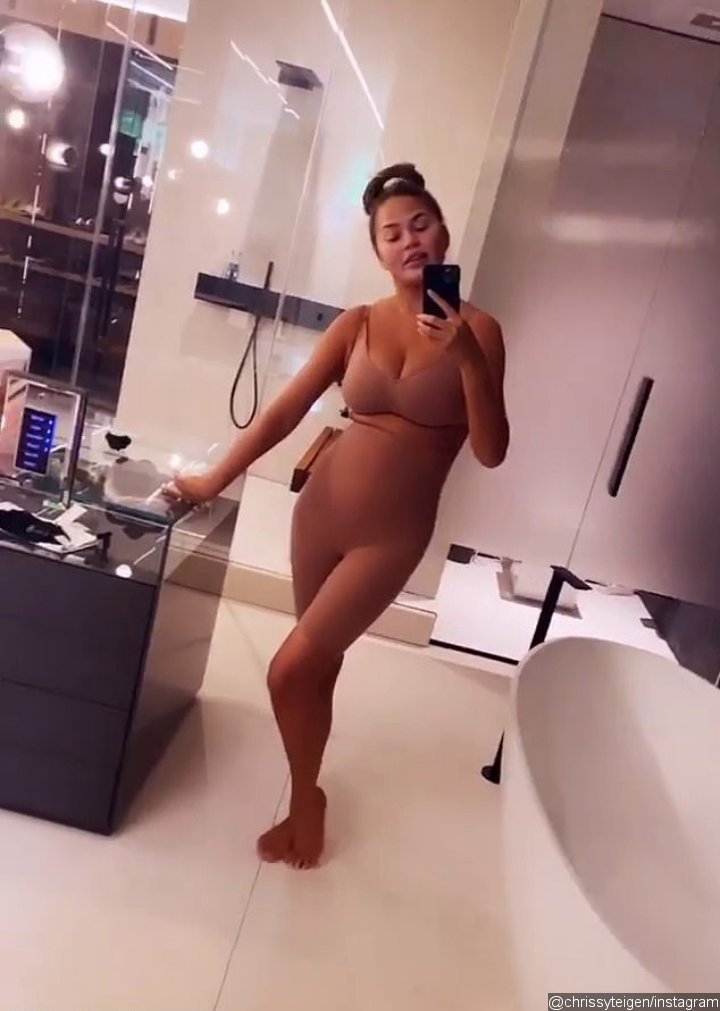 Not stopping there, Chrissy went on to call out the critics. "I actually decided that I think it's even kind of condescending to think that you have to defend us on this. Obviously the message is that pregnant women shouldn't have to feel like they have to make themselves smaller," she stressed. "They should feel beautiful and yes, absolutely, I 1000% agree with that. But what you're forgetting is that none of us think that this is making us smaller. Nobody thinks that."

Before Chrissy jumped to her defense, Kim herself had responded to the criticism. "To anyone who has an issue with maternity solutionwear, and if you haven't been pregnant before you may not know the struggle of what it's like carrying all of this weight the way I did along with millions of strong women, @skims maternity line is not to slim but to support," she tweeted.

The negative buzz spread online after Kim introduced Maternity Solutionwear on Instagram. Among her critics was actress Jameela Jamil who tweeted, "It would be cool if pregnant people could just be allowed to be pregnant and get bigger and not to be self conscious, and enjoy the miracle taking place inside their body and not have to worry about feeling embarrassed/shame that their body is changing for an amazing reason."

Chrissy Teigen Gives Fans Update on Her and John Legend After Miscarriage: 'We Are Okay'