Shutting down speculation that she and her husband of almost 20 years have separated after they moved to Arizona, the yoga enthusiast blames it on his disinterest in taking pictures.

AceShowbiz - Coco Austin is still very much together with Ice-T. When a fan expressed a concern that she and her husband of almost 20 years separated following their move to Arizona, the yoga enthusiast set the records straight, suggesting that people "misconstrue things."

On Wednesday, September 9, the 41-year-old took to Instagram to share a picture of her and her mother putting their blond locks on display. In the accompaniment of the rare snap, she wrote, "Hair day with mom. (With love from my hair glam team in Arizona! @wendyheydenstyling @lovechelsea.styling @yas.styling )."

Many of the model's followers were gushing over the mother-daughter's looks. One in particular, however, questioned why she had not shared any picture with her husband for quite some time. "Have you officially moved to AZ and left Your husband? I don't see you or your daughter with him anymore," the user asked.

The question apparently caught Coco's attention. Blaming her man's disinterest in taking pictures, she explained, "he made it out with us too but he doesn't like taking pics.. its like pulling teeth.." She went on to spill that her family stayed in Arizona for months since "Law & Order: Special Victims Unit", which her husband stars on, "stopped filming all this time," adding that they "just got back to NJ this past week." 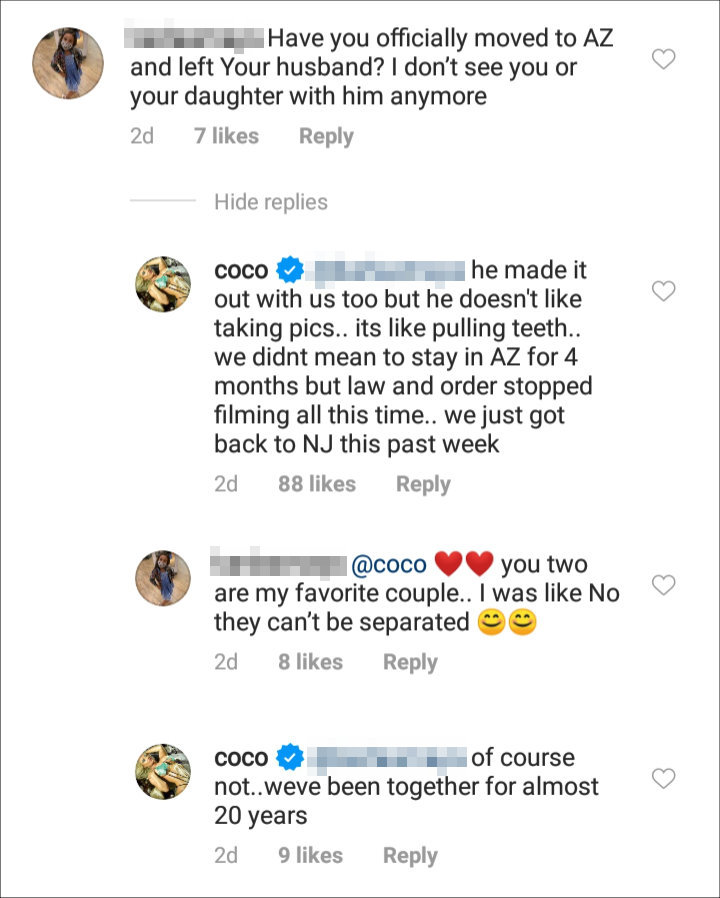 Coco Austin responded to a fan speculating her split from Ice-T.

The former "Ice Loves Coco" star later stressed that her marriage to the "High Rollers" rapper remains strong. When the fan continued to point out, "you two are my favorite couple.. I was like No they can't be separated," she wrote back, "of course not..we've been together for almost 20 years." 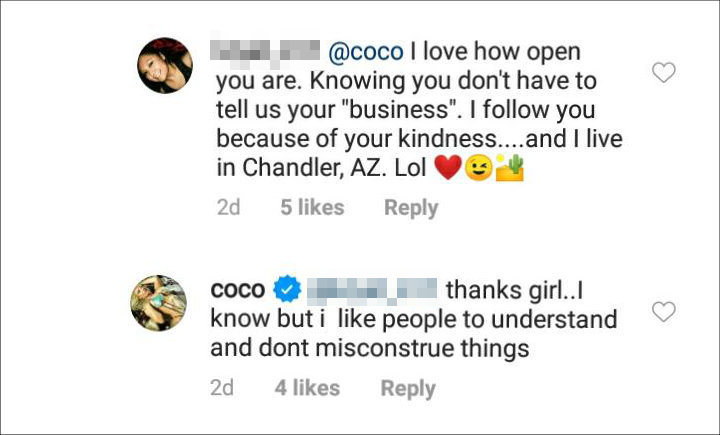 Coco Austin replied to another fan's comment gushing over her response.

Coco's clarification was met with praise by another devotee who wrote back, "I love how open you are. Knowing you don't have to tell us your business." In return, she responded, "Thanks girl.. I know but i like people to understand and dont misconstrue things."