The post in question features a couple of pictures of the 'Keeping Up with the Kardashians' cast member posing in a black-and-white jumpsuit with sexy cutouts.

AceShowbiz - It looks like Kylie Jenner has to be more careful before posting something on Instagram. The makeup mogul apparently made some mistakes in the caption of her post that was uploaded on the photo-sharing site on Sunday, August 16.

The post in question featured a couple of pictures of the "Keeping Up with the Kardashians" star posing in a black-and-white jumpsuit with sexy cutouts. She accessorized the outfit with several gold jewelry and styled her hair in a ponytail. Kylie looked gorgeous as always, but what caught people's attention the most was her caption. She first wrote, "Brown skinned girl," before changing it into, "Brown eyed girl."

Even though the Kylie Cosmetics owner was quick in changing the caption, some people with eagle eyes were quicker in taking a screenshot of her caption and re-sharing it online. Thus, the backlash was inevitable. "Her original comment was 'brown skinned girl' this girl really delusional," one person said. "I know you want to say 'brown skinned girl' so bad but," another user wrote in the comment section of the post.

"Are we not gonna talk about how Kylie Jenner called herself a brown skinned girl and then changed the caption like we wouldn't notice....," someone else wrote. "Y'all done let these culture vultures get away with so much s**t this h** think she a brown girl.. hoe u is white.. a genetic mu f**kin tation.. changed the caption but b***h it was caught!! Tired of this whole family #KylieJenner black men leave these h**s alone!" one angry individual gave a lengthy comment. 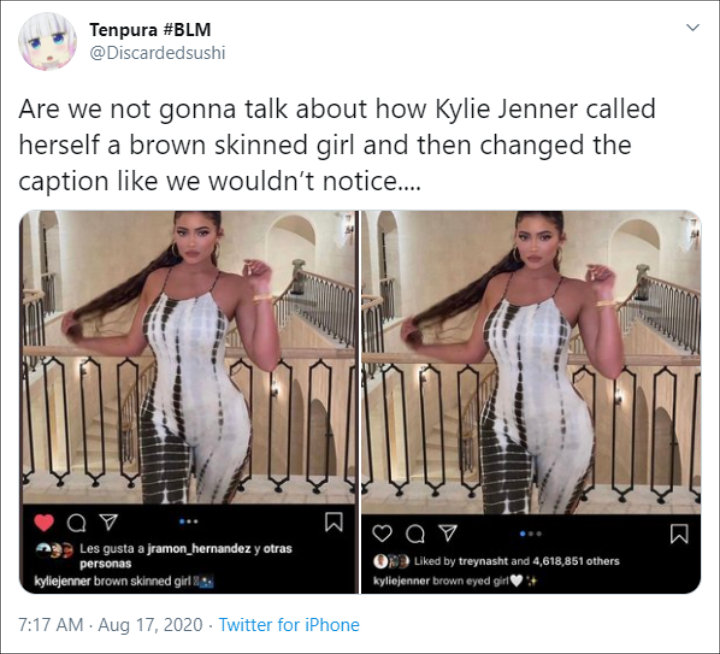