The 'Since U Been Gone' songstress claps back at a critic who claims her marriage ended because of her busy schedule after she filled in for Simon Cowell on 'America's Got Talent'.

AceShowbiz - Kelly Clarkson is not letting any haters shame her for her failed marriage. Just days after she announced that she would be filling in for Simon Cowell on "America's Got Talent", the "Since U Been Gone" singer was forced to defend herself from a critic who claimed her marriage to Brandon Blackstock ended because of her busy schedule.

On Thursday, August 13, the 38-year-old turned to Twitter to fire back at the troll. "Wow. Shaming a woman who has a great work ethic, is a great mom, and who steps up and fills in when a friends asks for a favor because that's actually what 'good old country girls' do," she wrote, "this can't be who you are deep down." She added in the same tweet, "I have more faith in your heart. Aim higher please." 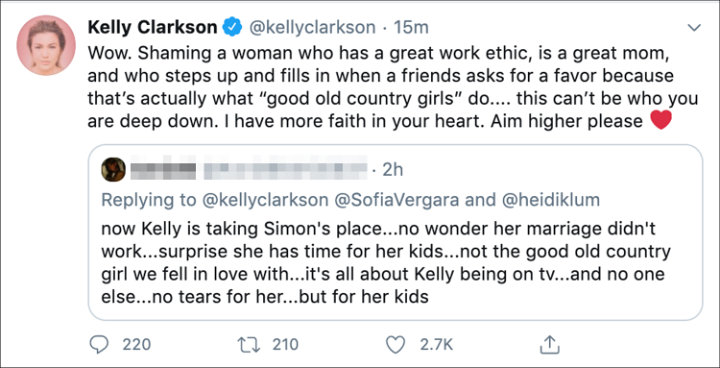 Kelly Clarkson clapped back at troll shaming her for her divorce.
See also...

The "American Idol" alum's response came several hours after the hater posted a now-deleted tweet that read, "now Kelly is taking Simon's place...no wonder her marriage didn't work...surprise she has time for her kids..." The critic continued, "not the good old country girl we fell in love with...it's all about Kelly being on tv...and no one else...no tears for her...but for her kids."

Kelly surprised many in June when she filed for divorce from Brandon after almost seven years of marriage. At the time, she cited "irreconcilable differences" as the cause of their separation. Together with her estranged husband, the "Stronger (What Doesn't Kill You)" singer has two children, a 6-year-old daughter, River, and a 4-year-old son, Remington.

As for her role as Simon's temporary sub on "AGT", the Grammy Award winner made the revelation just days after the record executive/TV personality broke his back in a bike accident. In a witty statement posted on her Instagram page, she offered fans an update on the 60-year-old's condition before making public her role.

"My friend, Simon Cowell, is doing better now but was in an accident and won't be able to make Tuesday and Wednesday's live shows for AGT," the mother of two shared. "But no worries America, someone far wiser, cooler, and hotter is taking his seat! The unbelievably amazing Kelly Clarkson. You're welcome in advance!"

Kelly Clarkson Addresses Difficult Part of Her Divorce: It Involves a Lot of Little Hearts

Kelly Clarkson Opens Up About Struggling After Her Divorce: My Life Is a Dumpster