The Kardashian sisters' rumored ex-BBF Larsa writes cryptic message on her Twitter page, insinuating that Kanye or men in general don't have a say about abortion.

AceShowbiz - Kanye West still proceeds with his anti-abortion agenda. On Friday, July 31, the "Gold Digger" rapper recently shared on his Twitter account a link to an article that further support his stance.

"Planned Parenthood removing Margaret Sanger's name from NYC clinic," read the title of the article that he shared on the blue bird app. He doubled down on the statement with a follow-up tweet, writing, "Over 22,500,000 black babies have been aborted over the past 50 years."

In response to the tweet, the Kardashians' rumored ex-BBF Larsa Pippen wrote a cryptic message on her page. Insinuating that Kanye or men in general didn't have a say about abortion, she said, "If you don't have a uterus, you shouldn't have a say." 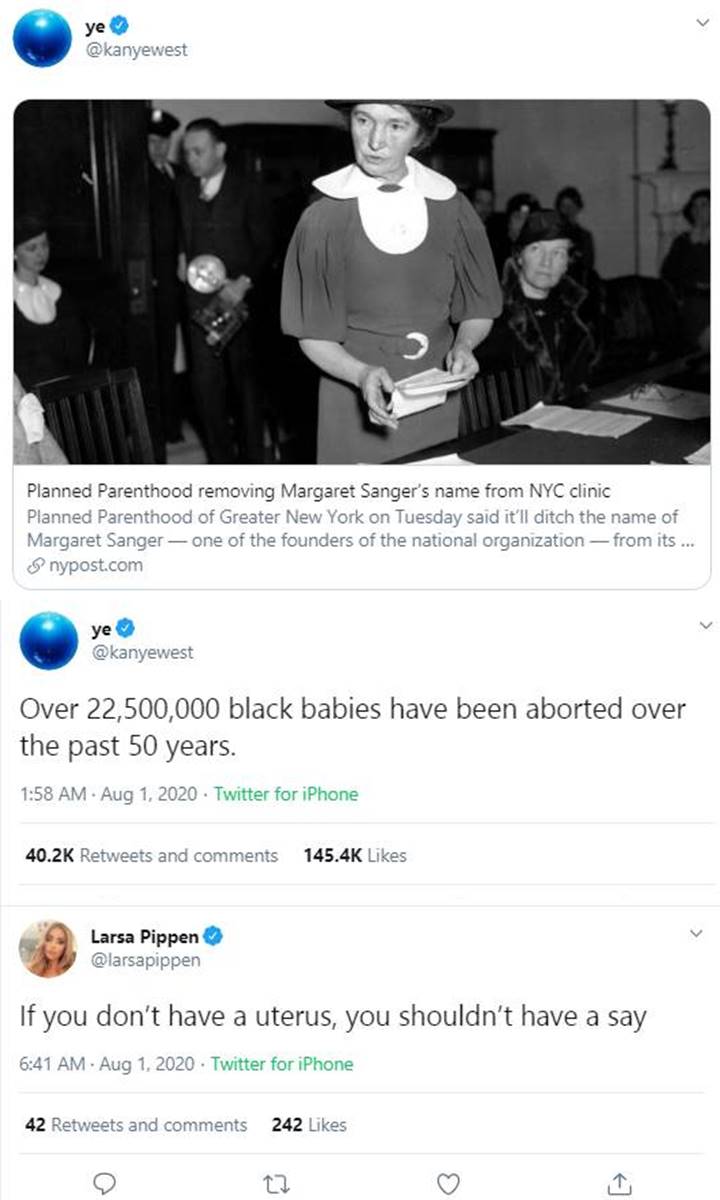 Kanye previously ranted about anti-abortion during his first rally in South Carolina. Getting emotional, the "Jesus Is King" rapper said he almost "killed his daughter" North and that his father almost made his mom abort him. He then said, "No more Plan B, Plan A. Anyone who is pregnant, you have an option of $50,000 of support to take care of your child."

Meanwhile, it was reported that Larsa and the Kardashians' friendship fell through as the famous sisters, including Kim Kardashian and Kourtney Kardashian, unfollowed each other on Instagram. After the social media drama, Larsa wrote on Instagram Stories, "I woke up this morning blessed and see that everybody is focused on who I am following and who I am not following on social media."

Larsa, who used to appear on "Keeping Up With The Kardashians", went on to say, "I am focused on my children, my new fitness brand Larsapippenfitness, and my relationships in real life. Praying that everybody finds peace in their own lives and focus on what brings THEM happiness."