People get even more baffled after finding out that the 'Captain America: The Winter Soldier' actor blocked them, prompting them to trend 'Sebastian Stan Is Over Party' on Twitter.

AceShowbiz - It looks like Sebastian Stan doesn't appreciate what people have been saying about his rumored girlfriend, Alejandra Onieva, at all. Many of his fans are now claiming that they're getting blocked by the actor for calling out the actress over what they deem a racist Instagram post.

The post in question was a photo that was taken two years ago when Alejandra attended an Asian-themed costume party with her friends. For the bash, the 28-year-old wore Kimono and other articles of clothing from Asian styles. In addition to that, she sported makeup that made her look like a Geisha. "ASIAN NIGHT," the caption of the image read. 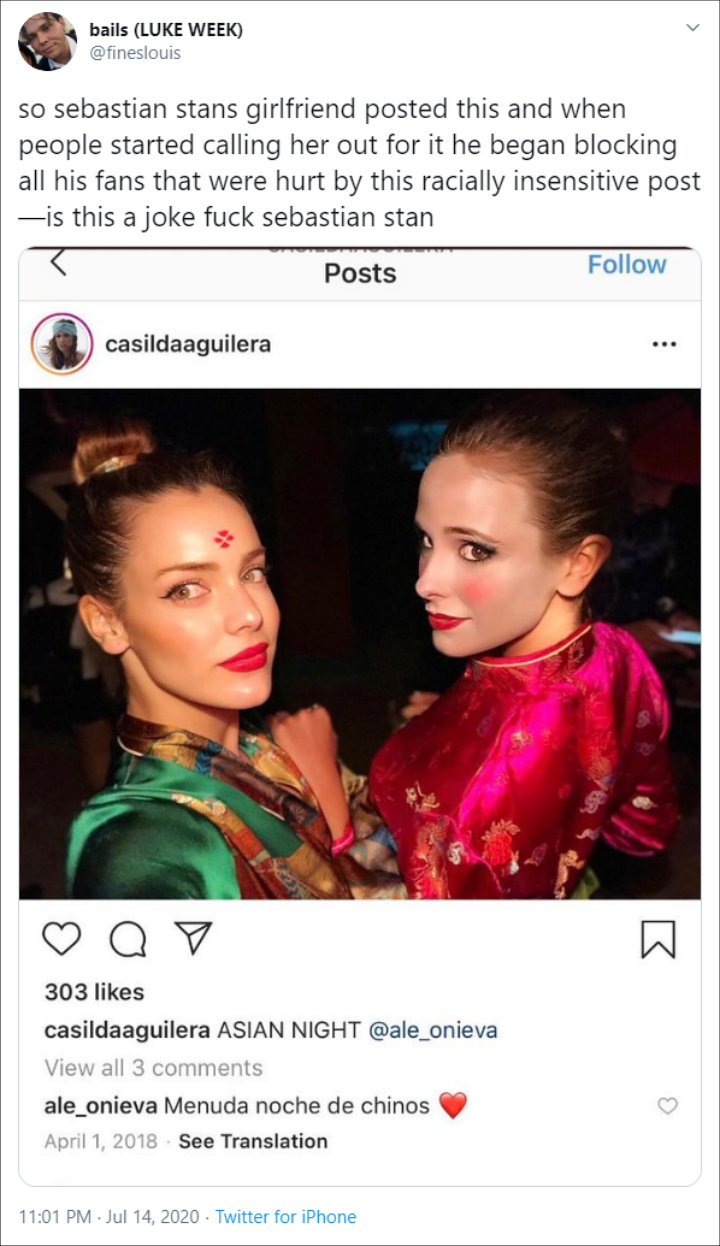 People were not having it and started calling both her and Sebastian out for cultural appropriation. However, instead of responding to them one by one, the "Captain America: The Winter Soldier" star apparently chose to simply block them so that they could no longer harass him. His move obviously made people even more baffled, to the point that they started trending "Sebastian Stan Is Over Party" on Twitter.

"we knew this day would come next time choose better people dumbass and wear different shorts for f**ks sake," one called him out. "I am once again disappointed but not surprised," one other wrote on the micro-blogging site, as another person joked that the only Sebastian s/he knew is Sebastian from "The Little Mermaid". Someone else commented, "if sebastian stan's pr team is reading this, i used stan that man. i saw his movies in theatres and supported his career and s**tty movies. i would like a refund."

"sebastian is a grown man and the way he handled the situation was really bad, don't defend him, please," another person said. "Why stan someone who defends blatant racist people and blocks fans who are hurt by his gfs actions when you can stan Luke Evans instead," someone chimed in.