Amid the recent success of the 'Hamilton' movie debut, the musical is under scrutiny again over its portrayal of Alexander Hamilton, who has been accused of being complicit in the slave trade.

AceShowbiz - Lin-Manuel Miranda has responded after "Hamilton" came under fire over accusation that it glorifies slave owners. In light of the massive success of the "Hamilton" movie which debuted this past weekend, the show is under scrutiny again over its portrayal of Alexander Hamilton, who has been accused of being complicit in the slave trade.

In the musical and the film, Hamilton is depicted as a "young, scrappy, and hungry" immigrant and someone who was passionate about the abolition of slavery. The real Alexander Hamilton, who was the inspiration behind the musical, has been accused of being complicit in the slave trade as he had several friends who owned slaves, including George Washington.

Though he despised slavery, Hamilton married into a prominent New York slave-holding family and managed the sale of slaves for his in-laws. He also did accounting for a Caribbean trading company that engaged in the slave trade.

Following the release of the movie version, people demand "Hamilton" cancellation, with the hashtag "#CancelHamilton" growing on Twitter. "How is Hamilton not canceled? Alexander Hamilton owned and traded slaves. I think we need to cancel Hamilton," one person wrote on Twitter. Another added, "Hamilton was a slave trader. Tear down the statues NOW and #CancelHamilton."

Writer Tracy Clayton posted a series of tweets debating the issue with "Hamilton", writing that the play and the movie version "were given to us in two different worlds & our willingness to interrogate things in this way feels like a clear sign of change."

The host of the weekly Netflix podcast "Strong Black Legends" added that "Hamilton" is "a flawed play about flawed people written by an imperfect person that gave my flawed and imperfect little life a big boost when i needed it most, so again i know im biased, but i do appreciate the change this illustrates & will be following the convo's evolution."

Miranda, who wrote the music and lyrics as well as starred in the original Broadway show, later responded to the backlash by commenting on the thread. Taking the criticisms in stride, he wrote, "Appreciate you so much, @brokeymcpoverty. All the criticisms are valid." 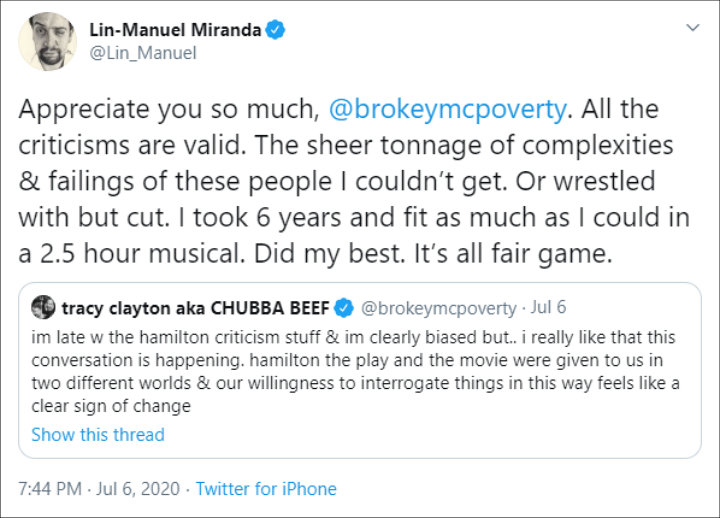 The 40-year-old playwright went on admitting his shortage in creating the musical, "The sheer tonnage of complexities & failings of these people I couldn't get. Or wrestled with but cut. I took 6 years and fit as much as I could in a 2.5 hour musical. Did my best. It's all fair game."