Hours prior to his death, the popular streamer made use of his social media account to propose to his girlfriend, Becca, but she didn't see his proposal until 'it was too late.'

AceShowbiz - The gaming community is mourning the loss of one of its most beloved personalities. Byron Bernstein, who went by the name Reckful, has passed away, his ex-girlfriend and roommate confirmed the news on Thursday, July 2. The cause of his death is unknown, though there's a high possibility that the Twitch streamer committed suicide. He was 31.

Hours prior to his death, Byron made use of his Twitter account to propose to his girlfriend, Becca. "I know I'll be always a little too crazy… and this is proof… but at least you'll never be bored. Will you marry me, Becca?" he said, along with several photos of them together. Later, in another tweet, he asked her followers not to pressure her to accept his proposal. "I know she's the one I want forever, and I want her to know my commitment is real," he added. 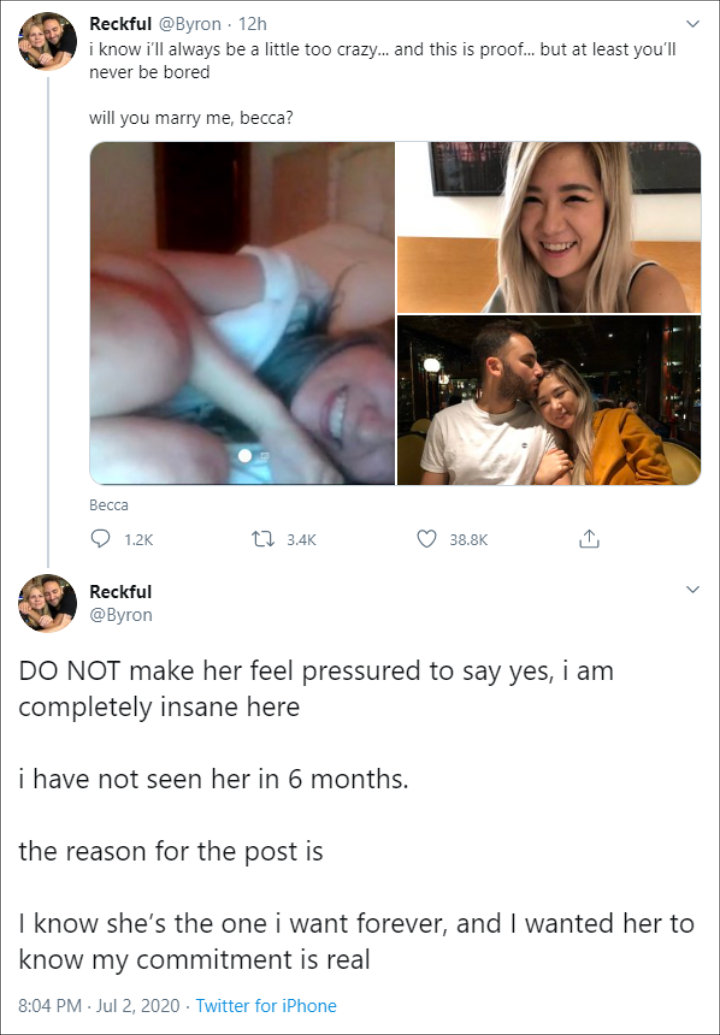 Unfortunately, Becca did not see his proposal until it was too late. In a lengthy statement she issued hours after his death, she expressed how regretful she was to not be able to be by his side when he needed it. "That doesn't change the fact that I wasn't able to be there for him," so she wrote.

Becca went on writing about how amazing Byron was and how he "brought me to realize I know NOTHING about depression, NOTHING about mental health issues. I had this vague idea of what it was and embarrassingly that I could help with trivial bulls**t."

"We need better support for those with mental needs. I remember Byron telling me how traumatized he was when he had the authorities called on him for being at risk of suicide. Anyone that knew him knew how much it scared and affected him," she added. "THIS CAN'T BE HOW PEOPLE FEEL ABOUT THE PLACES THAT SHOULD BE KEEPING THEM SAFE. HOW THE F**K IS THAT OK? Friends don't feel that it's the right move to call for help when they know that the mental institutions they get sent to treat them like animals incapable of understanding. F**K that stupid a** Logic song about the hotlines."

Concluding her lengthy post, Becca encouraged her followers, "My heart hurts. I'm sure many of yours do as well. Byron just wanted everyone to be friends, so let's be that for each other during these difficult times. I will do my best to live as the best human I can be, Byron. I promise. Rest in peace."

If you are having suicidal thoughts or know someone who needs help, please call the National Suicide Prevention Lifeline at 1-800-273-TALK (8255).