Many fans of the 20-year-old rapper, who was shot and killed in February, have deemed the 39-year-old artistic director of Louis Vuitton lazy over his designed artwork.

AceShowbiz - Virgil Abloh's cover for Pop Smoke's debut album is to be changed, after fans slammed the "lazy" artwork online.

The 39-year-old artistic director of Louis Vuitton's menswear collection unveiled the cover, a grayscale picture of Pop Smoke surrounded by diamond roses and barbed wire, on his Instagram page on Monday, June 29, in a post which has since been deleted.

Captioning the snap, he wrote: "the last conversation i had with @realpopsmoke was about what we were gonna do in the future. this album cover was one of like 5 things we talked about. He mentioned his story felt like the metaphor of a rose & thorns growing from the concrete of his hood in Canarsie, Brooklyn."

"In your memory, I just finished it yesterday. As evidence of the whole idea, the t-shirt insinuates it's mandatory we put an and (sic) to this cycle of violence that plagues us, we need to shoot for the moon & aim for the stars."

However, many fans of the 20-year-old rapper, who was shot and killed in February, were quick to criticise Virgil for the image, with one remarking that the image used is the same as the first picture that comes up when Pop Smoke is image searched on Google.

"This is lazy. Pop Smoke deserves better," another wrote.

Minutes later, a petition was created on Change.org to get the artwork changed, with the description reading: "Virgil deada** was wild lazy with Pop Smokes Album cover and he needs to fix it."

And heeding the backlash, Steven Victor, the head of the Victor Victor Worldwide label that signed Smoke, tweeted that the album cover would be changed and will be ready for the July 3 release of "Shoot for the Stars, Aim for the Moon". 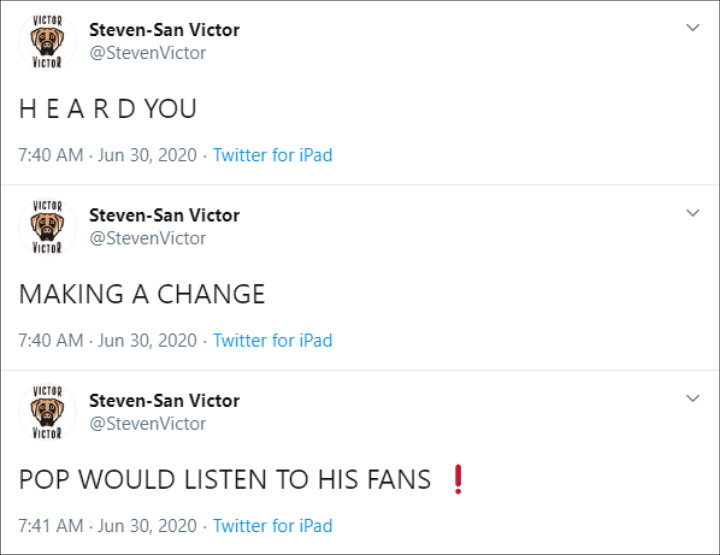 "HEARD YOU," he tweeted. "MAKING A CHANGE. POP WOULD LISTEN TO HIS FANS!".