Matthew A. Cherry, who won an Oscar for 'Hair Love', suggests a follow-up to the 1992 film should pick up from the point where a black woman impressed Geena Davis' character with her throw.

AceShowbiz - Gabrielle Union is calling for a sequel to "A League of Their Own", chronicling the rise of the three female black stars of post-war baseball.

Sportsman-turned-filmmaker Matthew A. Cherry, who picked up an Oscar earlier this year for his short "Hair Love", has suggested the sequel should pick up at the point in the 1992 film when a black woman in the crowd at a game throws the ball, impressing Geena Davis' character, who was playing in the first female professional baseball league.

In a 2018 tweet Union has shared, Cherry wrote: "Imagine A League Of Their Own sequel that starts with the scene of the black woman throwing the ball back from the stands and you stay with her and it becomes a biopic on (Toni Stone, Mamie Johnson & Connie Morgan)."

"Can we make this please?" the actress tweeted. "Asking for a bunch of us." 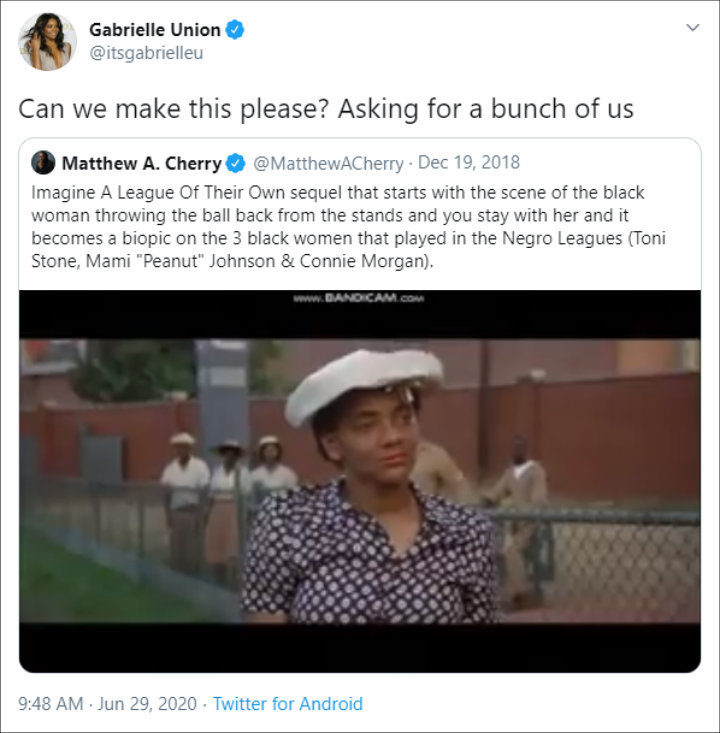 Gabrielle Union loves an idea of black female-centered 'A League of Their Own' sequel.

Stone, Johnson, and Morgan played professional baseball in the 1940s and 1950s.