Ice Cube Offers Walmart $100,000 to Cover Damages Only If Looters Are Not Arrested

AceShowbiz - Rapper/actor Ice Cube is offering to cover the cost of damages and stolen goods looted from a Florida superstore after a Black Lives Matter protest - as long as no arrests are made.

The "Ride Along" star is willing to pay $100,000 (£80,000) to bosses at the Walmart location in Tampa after surveillance video footage showed crowds of black men and women running through the shop and leaving without paying for their items.

According to local news station CBS 47, the incident occurred following a city demonstration on 30 May - five days after African-American man George Floyd was killed at the hands of a white cop in Minnesota.

And after the cost of the looting hit headlines on Friday, June 12, Ice Cube, who has been a vocal supporter of the Black Lives Matter movement following Floyd's death, volunteered to pay for the vandalism and missing goods, in exchange for authorities not pressing charges against those involved.

He reposted the video on his Twitter page and commented, "No arrest and I'll cover the $100k. Deal?" 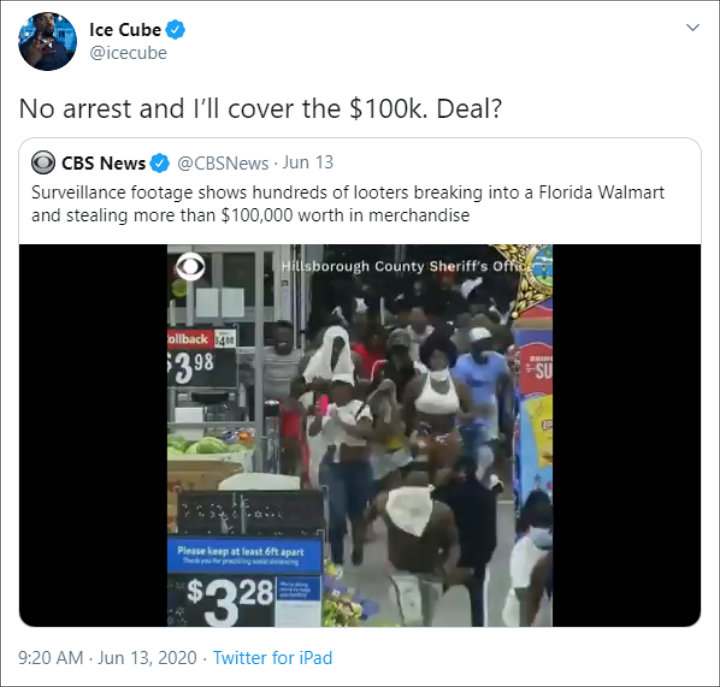 Police chiefs and store bosses have yet to respond to the proposal, which emerges days after Ice Cube caused a stir online by posting an anti-Semitic image while attacking racial injustice, and refusing to take it down.