Candace Owens Goes Off on Lance Bass for Calling Her 'Fraud'

The conservative political commentator claps back at the former NSYNC member by bringing up his boyband past, dubbing him 'Justin Timberlake's fourth back-up singer.'

AceShowbiz - Candace Owens and Lance Bass have been involved in a strange Twitter feud. It all started after the former NSYNC member called out the conservative political commentator for starting a GoFundMe page for a bar owner that called George Floyd a "thug."

The 41-year-old singer called the right-wing political pundit as "fraud" on Facebook and linked a Business Insider article which headline read, "GoFundMe shut down Candace Owens’ account for attacking George Floyd‘s character, saying she spread ‘falsehoods against the black community." He also shared a NewsOne article titled, "Every Receipt Proving Candace Owens Is a Con Artist Who Is Following the Money."

He wrote in the caption of the post, "Anyone that uses this a**hole to justify ANYTHING is well, an a**hole. This woman knows what she is saying is wrong. She does it to get PAID! Just like that Milo Yiannopolous fraud. #CandaceOwens is a fraud."

Catching wind of Lance's post, Candace hit back at him on Twitter, "Apparently, @LanceBass -known to most of us as Justin Timberlake's fourth back-up singer from decades past-has been going off about me on Facebook bc he thinks any black person that won't support BLM ain't black. Lance, you peaked in high school. Nobody cares what you think." 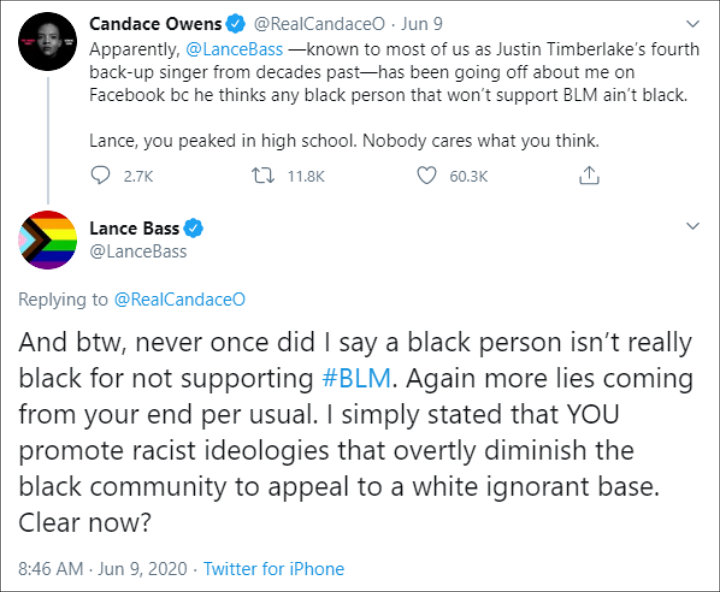 Candace Owens and Lance Bass have been involved in a Twitter feud.
See also...

She added, "Maybe when JT wins another lifetime achievement award, he'll invite you sing back up again. Until then -- why don't shut up. My grandfather didn't live through segregation so that one day a white boy could to tell me how to behave like a good little black girl. @LanceBass."

Not remaining quiet, Lance responded to Candace's remarks, "And for the record, I never and would never question the 'blackness' of any black person. Despite their viewpoints. I simply called her a fraud for these reasons...."

"And btw, never once did I say a black person isn't really black for not supporting #BLM," he continued. "Again more lies coming from your end per usual. I simply stated that YOU promote racist ideologies that overtly diminish the black community to appeal to a white ignorant base. Clear now?"

Accusing Candace of using the opportunity to sell her book, Lance wrote, "Oh and @RealCandaceO-it says more about you than me that your using this this '4th string has-been back up dancer' to get attention for your book. And please, as if you didn't have my poster on your wall. WE SEE YOU."

After Lance blocked Candance on Twitter, she appeared to respond again as writing, "NOOOOOOOOO!!! HOW WILL I SELL MY BOOK?!!!!"