Pink Challenges Donald Trump's Supporters After Calling Against His Re-Election

In the midst of the Black Lives Matter protests, the 'Just Give Me a Reason' hitmaker questions support for 'a president that doesn't govern, respect, or represent half of our country.'

AceShowbiz - Pink wants Donald Trump's supporters to prove her wrong. Hours after she took aim at fellow Americans seeking to re-elect the former businessman in the upcoming presidential election, the "Just Give Me a Reason" hitmaker made time to respond to those adamant in defending the POTUS.

In one tweet, a Trump supporter described patriot as "a person who vigorously supports their country and is prepared to defend it against enemies or detractors," adding further, "Seems to me that is exactly what he's been doing Trump 2020." To which, Pink wrote back, "Thank you so much for that. Truly enlightening. Okay, now tell all of us exactly how he's done that. You have the floor. Go..." 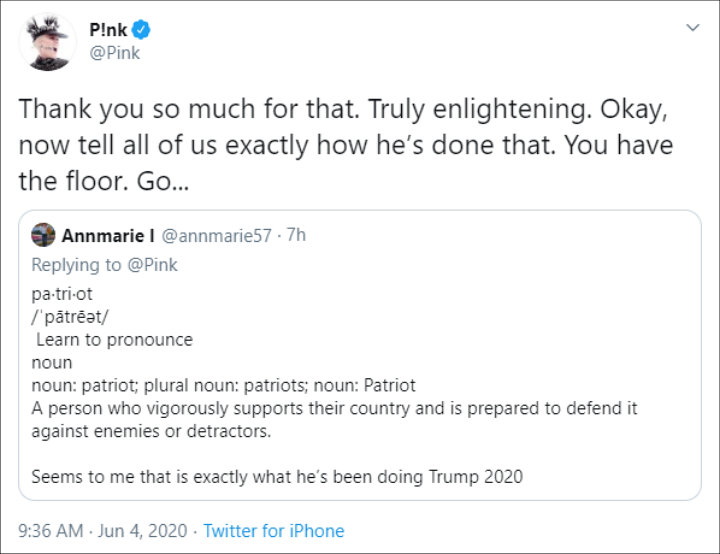 Pink reacted to Trump supporter branding him a patriot.

Another supporter confronted the 40-year-old by tweeting, "But yet we suffered through eight years of someone before him that did more to divide this country than any one president has ever done. That's America?" In return, she simply asked back, "How exactly?" When a third defender accused her of being wrong, she replied, "Okay. How?" 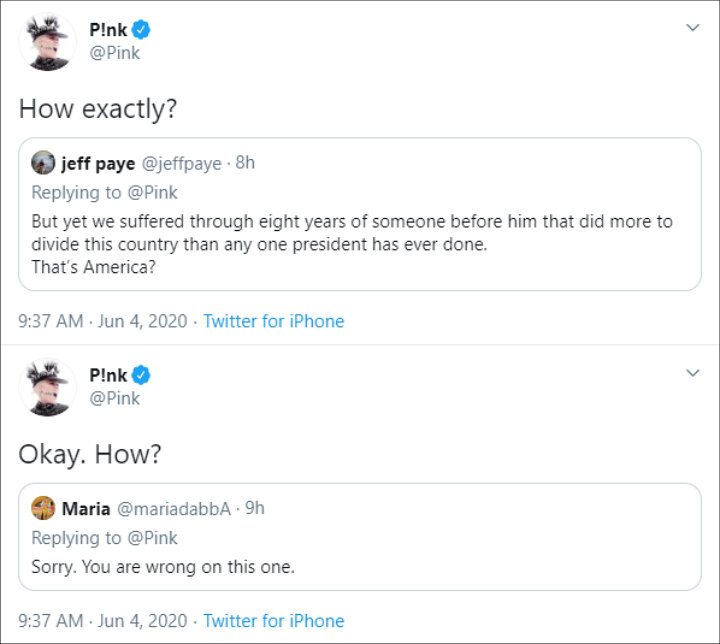 Pink's banter with Trump's followers came hours after she shared a Twitter video of her voicing her thoughts on the 45th President's response to the Black Lives Matter protests that have swept the nation. On Wednesday, June 3, she asked, "How can anyone call themself a patriot or American if you re-elect a president that doesn't govern, respect, or represent half of our country?"

"That's not America. That's your America. It's not America," she pointed out. "So you either worship the confederate flag, which is not our flag and it never will be. Or you're a hypocrite that doesn’t actually understand the meaning of patriotism or what it means to be an American." She concluded her message by simply stating, "Truth."

In support of the "Dear Mr. President" singer's powerful statement, a Twitter user pointed out that her father is a veteran. Such response got her writing back, "Yep, along with my step mother, and brother. They all fought for this country, for all of us."

Pink responded to fan noticing her father as a veteran.

Pink has been one of the many celebrities that have used their platforms to support for the Black Lives Matter movement in the wake of George Floyd's death. Last Saturday, May 30, she shared a screenshot of Billie Eilish's post slamming 'All Lives Matter', a slogan adopted by those opposing the BLM.

The wife of Carey Hart was quick to receive messages of disagreement. One in particular told her, "Totally get where you're coming from. HOWEVER, as a person with a lawyer brain, I have to say… when you single out one race and say 'that' race matters. You ARE implicitly saying other races don't matter as much. It is automatically inferred." 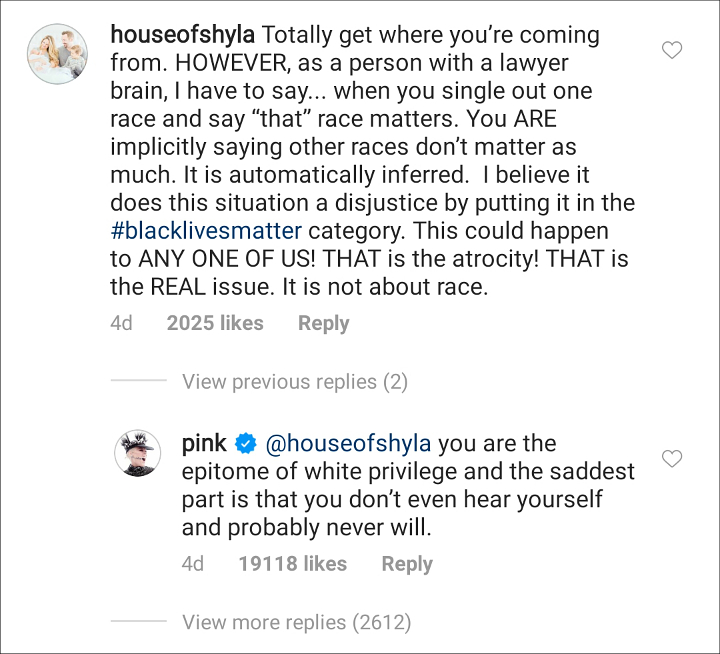 Pink blasted Instagram user for being the epitome of white privilege.

"I believe it does this situation a disjustice [sic] by putting it in the #blacklivesmatter category. This could happen to ANY ONE OF US! THAT is the atrocity! THAT is the REAL issue. It is not about race," the commenter continued. In response, she hit back by stating, "You are the epitome of white privilege and the saddest part is that you don't even hear yourself and probably never will."

Pink Feels 'Disgusted and Embarrassed' by Racism, Donates for Black Lives Matter Cause