AceShowbiz - Kimberly Alexander was quick to respond after Khloe Kardashian and Tristan Thompson threatened to file a multi-million dollar lawsuit against her. The woman who claimed she's the mother of the basketballer's third child insists she tell the truth.

"Lies???? Where is the lie?? My truth will be heard," so she wrote on her Instagram Story. While she didn't directly mention Khloe or Tristan, she tagged the Kardashians-affiliated website Eonline which just ran a story to dismiss her paternity claims. 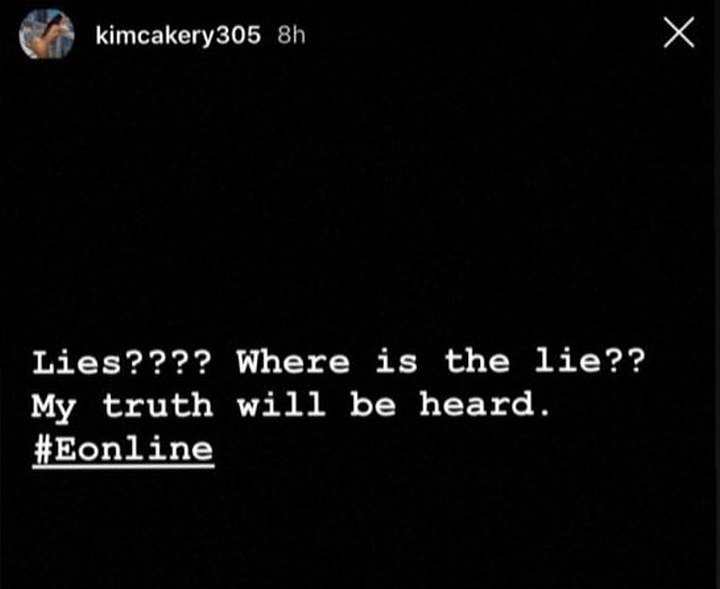 Khloe and Tristan sent a cease and desist letter and would sue if Kimberly didn't stop her "malicious defamatory lies and specious fabrications." In the letter, Kimberly was accused of seeking "15 minutes of fame" after a DNA test proved Tristan's not the father of her child.

When Kimberly first came out with her claims, she insisted the DNA test was compromised because the lab was linked to the Kardashians. She demanded a second test.

In the cease and desist letter, Tristan's legal team said he agreed to take a second test on the condition it was carried out by an AABB-accredited laboratory.

Kimberly was initially represented by Lisa Bloom, but the famed lawyer later dropped her as client after she aired out the case on a gossip blog.

Meanwhile, Khloe herself was rumored to be pregnant with her second child with Tristan. Many, however, were skeptical. They accused her and momager Kris Jenner of purposely creating the pregnancy rumors to draw attention away from the Tristan and Kimberly drama.

The "Keeping Up with the Kardashians" star recently vented her frustrations on Twitter, "The nasty things you're saying about me over A RUMOR! I have seen so many hurtful/despicable stories and tweets about me over a false story. And if it were true.... it's MY LIFE, NOT YOURS."