The 'I the Heights' helmer is disgusted by the casting scam for the sequels of the 2018 hit film, calling it a 'direct attack' to Asian American actors pursuing 'this dream that they never thought was possible before.'

AceShowbiz - Jon M. Chu is sending a stern warning to those who attempt to scam Asian American actors hoping to land parts in the upcoming sequels to his 2018 film "Crazy Rich Asians". The director has hit hack at a Twitter user who posted a fake casting call for "China Rich Girlfriend" and "Rich People Problems".

Taking to the blue bird application, Chu wrote on Thursday, April 30, "Advice for actors out there: if ANYONE ever asks you to PAY MONEY to audition it's a scam." He added to the scammer, "Also don't mess with Asian actors during our surge or we will bite back!!" 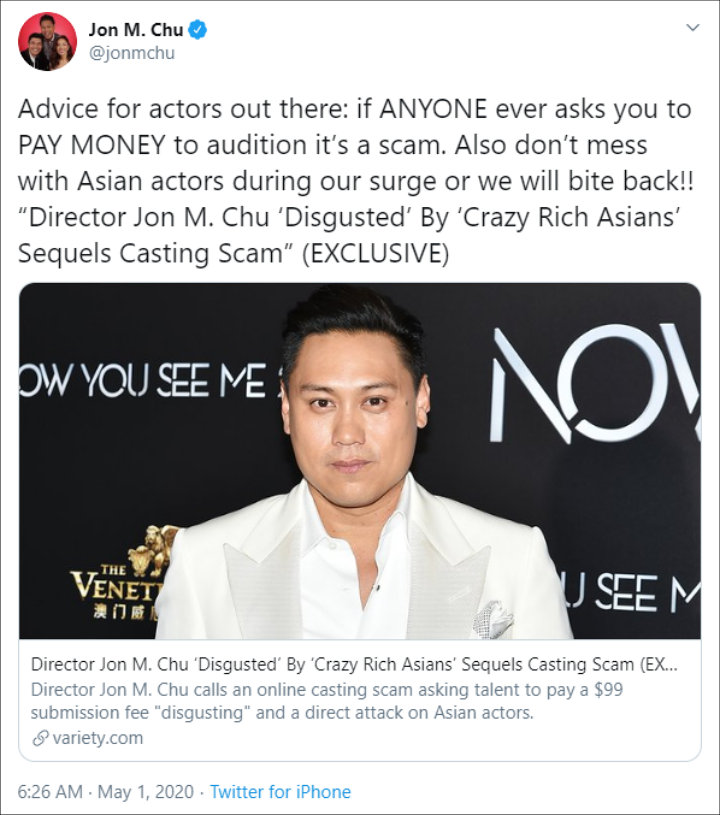 Chu's tweet was in response to a fake casting call posted by a user named Alan Baltes, who falsely claimed that the supposed "Crazy Rich Asians" sequels opened "live Zoom auditions" for "new lead roles" in the upcoming movies.

The fake casting notice said that the movies were looking for Asian actors, ages 20s through 40s, for the lead roles, and a Caucasian female between ages 25-35 for another part. The post asked that talent who wanted to be considered pay Baltes a $99 "submission fee" via Google Pay or Venmo.

Chu, who was alerted about the notice when he was tagged in a tweet, said he subsequently notified Twitter and flagged Warner Bros.' legal department. After posting his own reaction, the 40-year-old helmer said he was promptly blocked by Baltes on Twitter.

Speaking to Variety, Chu said he was appalled by the attempt to scam acting hopefuls. "I kept reading it, and when it said '99 dollars,' I was like, 'This is f***ed up,' " he recalled. "There's so many scams like that in L.A. anyway and to actually target, specifically, Asian actors, was very frustrating."

"Asian American actors finally get the opportunity or the hope that there are roles and parts out there. People have this light inside of them to pursue this dream that they never thought was possible before, and to take advantage of that and know that you can take $99 for a fake audition is just disgusting," he expressed his dismay.

"To put on top of that this time, when we're being othered and we're being attacked on the streets, is even more disgusting," Chu, who has worked on upcoming musical drama "In the Heights", added.

Baltes' Twitter account has since been deactivated. He said in an email to Variety that he posted the fake casting call after "someone sent me the information and was misrepresenting himself as being with casting. The person is no longer in contact with me after I inquired further. They were attempting to get me to send them money for casting calls."

Baltes, who claims to be an actor, casting associate and talent agent, also said that no money had been paid in regards to the fake casting call. When asked who had supplied him with "false information," he replied, "I no longer have the information as it was on my Twitter and my account was deleted."

This is not the first time though that Baltes has been linked to an attempt to solicit money for "submitting" talent for auditions in big movies. In 2018, Twitter users notified director Colin Trevorrow over a similar casting notice for a "Jurassic World: Fallen Kingdom" sequel, which is now called "Jurassic World: Dominion", where Baltes asked for a $99 audition fee. Trevorrow said at the time, "Anyone who requests money for an audition isn't on the level."

As for the pre-production of "Crazy Rich Asians" sequels, Chu said, "We're so far from it. We don't have a casting director. We have never said, 'Hey, let's look at people who are out there.' We've done zero." He added, "We don't even have a script."