Along with Christine Baranski, the 'Mamma Mia!' star performs a boozy rendition of 'The Ladies Who Lunch' for 'Take Me to the World: A Sondheim 90th Birthday Celebration'.

The pair were joined by Audra McDonald, with all three guzzling drinks during their performance of the tune, from Sondheim's musical "Company", during "Take Me to the World: A Sondheim 90th Birthday Celebration".

While Christine opted for a glass of red wine and Audra turned straight to the bottle, Meryl added her own percussion to the performance with a cocktail shaker - pouring herself what appeared to be a martini.

Meryl, Christine and Audra's performance was just one of a host of star-studded renditions on the evening. But things didn't get off to a great start, with several technical difficulties causing the concert to trend on Twitter.

The celebration was already running 35 minutes late when actor and host Raul Esparza suddenly appeared on the live link and started chatting to Sondheim without knowing he was being broadcast.

Then, after the first performance of the evening from composer Stephen Schwartz, Esparza once again spoke to the camera - but a technical issue meant he was completely mute, leading to him walking off and the link being switched off.

Watching from home, "Hamilton" star Lin-Manuel Miranda tweeted: "Hope someone is rolling on the Noises Off production happening right now at #Sondheim90Concert."

Miranda showed her appreciation toward the performance.

"My heart hurts for Raul on the tech stuff, who has put together by all accounts an unforgettable show. I really can't wait to see it. But the WORK WAITS… #Sondheim90Concert."

Actress Rachel Bloom added in her comment: "Someday a musical will be made based on the comments section of this Sondheim 90th Birthday concert live stream which is now 15 minutes late and counting." 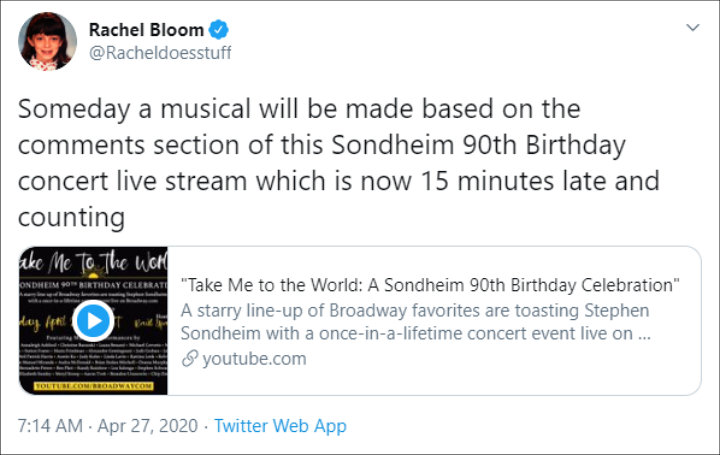 Proceeds raised from the live stream, which aired on Broadway.com and YouTube, will be donated to ASTEP (Artists Striving to End Poverty), amid the coronavirus pandemic.