Having recovered from coronavirus, the father of Prince William and Prince Harry is taking part in his first podcast by taping the segment from his home in the Scottish Highlands.

As the coronavirus pandemic has forced worshippers into self-isolation, Westminster Abbey officials have launched their own show, called Abbeycast, and they have landed a special appearance by the heir to the throne for the upcoming holiday episode.

Prince Charles has recorded a Bible reading of John 20: 1-18, which tells of the resurrection of Jesus Christ, to air during their digital and virtual services (https://www.westminster-abbey.org/podcast).

In a post on Twitter, Abbey representatives write, "We are delighted that our Easter Day podcast will include a Gospel reading recorded by HRH The Prince of Wales. The reading will appear alongside an address, anthem, prayers and a blessing in the podcast - part of a series we have launched to support worshippers around the world." 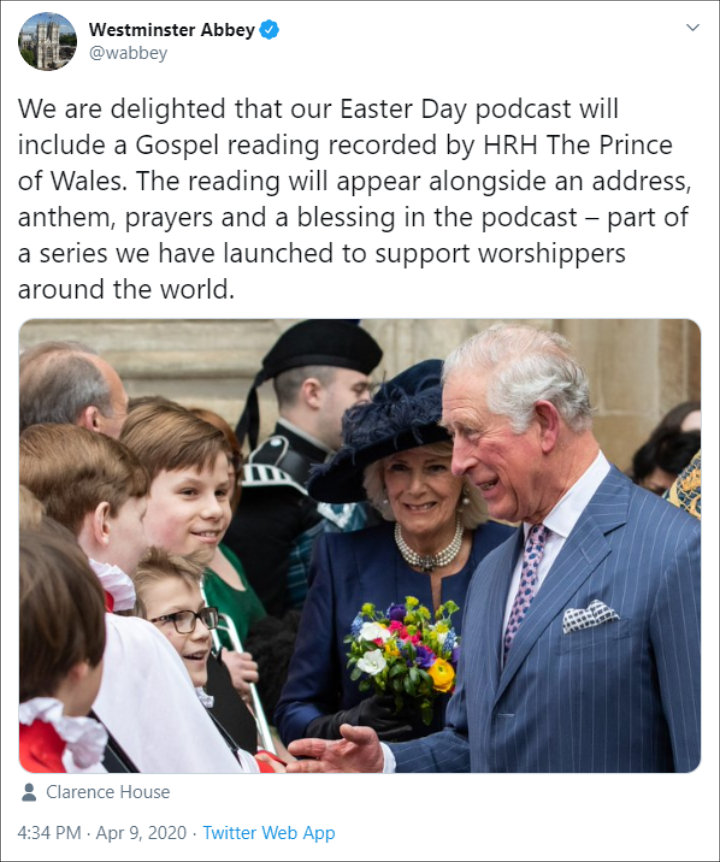 Prince Charles taped the segment from his home in the Scottish Highlands, where he is staying with his wife Camilla, Duchess of Cornwall, after recovering from COVID-19.

The couple spent 14 days apart while the 71-year-old was quarantined, but Charles and Camilla were reunited just in time to celebrate their 15th wedding anniversary on Thursday.

A new photo of the royals was released on the eve of the special date, with the pair appearing to recreate its official engagement picture by posing at the entryway of its Birkhall home - this time holding its two dogs, Bluebell and Beth.