Record executive and podcast host Adam 22 is among those who breaks the heartbreaking news, writing, 'Shoreline Mafia associate @MACPDAWG was gunned down in LA tonight.'

AceShowbiz - The hip-hop industry has once again been hit with tragic news. Rapper Mac P Dawg, a member of hip-hop group Shoreline Mafia, is dead after being gunned down in Los Angeles on Monday night, April 6. His friends and group members confirmed the heartbreaking news on social media.

Record executive and podcast host Adam 22 was among those who broke the news, sharing a tribute to Mac P. Along with several photos of the rapper with his friends, Adam wrote on his Twitter account, "Shoreline Mafia associate @MACPDAWG was gunned down in LA tonight. Rest in peace." 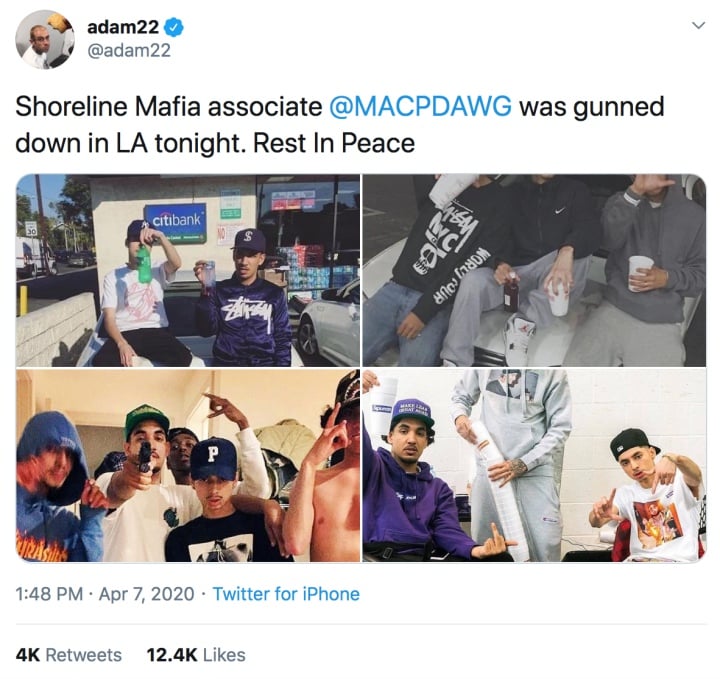 Some of Shoreline Mafia members also posted their own tribute, including Fenix Flexin who shared on Instagram, "Speechless bro love u always, macpforever." On the other hand, Master Kato wrote, "OTX PRESIDENT. LOVE U."

Details regarding Mac P's death remains unclear as authorities have yet to speak up. Despite that, tributes continue to pour in from fans on social media. "rip to my brother i can’t believe this is real. Fast money otx mac p dawg forever i love you so much," one fan wrote. "Rip Mac p, you always be missed... we'll never forget how talented you are... your musics well live on," another said.

Mac P was a part of hip-hop group Shoreline Mafia, who was formed in 2016. The group released their first mixtape, "ShoreLineDoThatS**t", in 2017 independently before signing to Atlantic Music Records in May 2018. Later on, they embarked on a tour which included stops at the Rolling Loud Festival in Miami and the Billboard Hot 100 Music Festival in New York. Besides touring, they were featured on songs on the "Ron-Ron and Friends" compilation mixtape in June of the same year.