The 'Go Loko' hitmaker is the second celebrity who talks about the conspiracy theory as back in March, singer Keri Hilson took to her Twitter account to share similar messages.

AceShowbiz - YG is apparently a believer of a conspiracy theory that COVID-19 is related to 5G. The rapper recently took to his Instagram account to further share the theory with his followers. 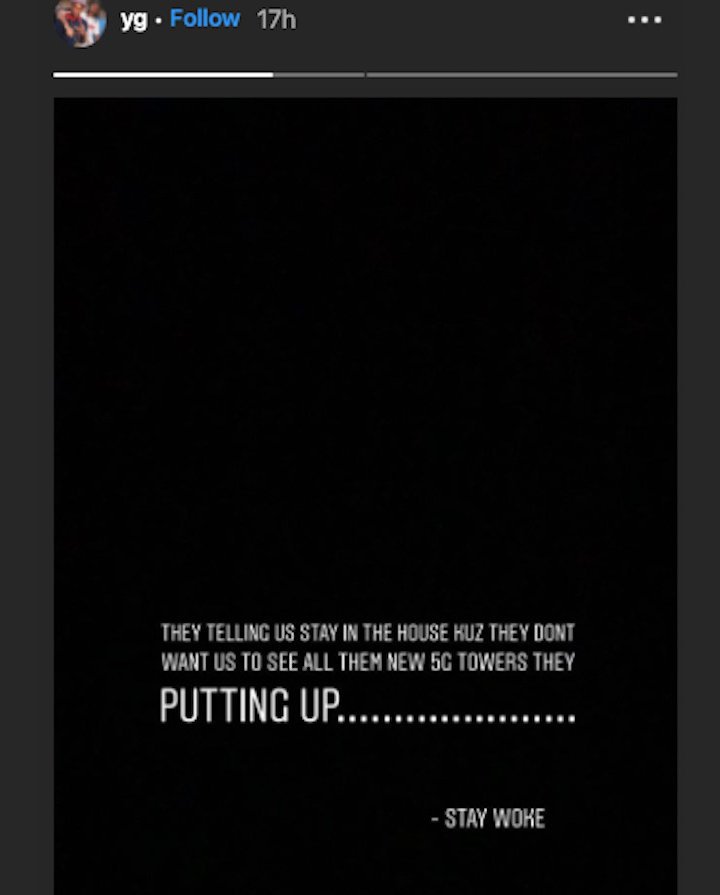 YG thought that 5G networks had something to do with Coronavirus.

The "Go Loko" hitmaker is the second celebrity who talks about the conspiracy theory. Back in March, singer Keri Hilson took to her Twitter account to allude the pandemic had something to do with 5G networks.

"People have been trying to warn us about 5G for YEARS," Keri wrote in the now-deleted tweet. "Petitions, organizations, studies...what we're going thru is the affects of radiation. 5G launched in CHINA. Nov 1, 2019. People dropped dead. See attached & go to my IG stories for more. TURN OFF 5G by disabling LTE!!!"

She also shared links and video clips to support her argument, though it didn't automatically make her theory convincing. If anything, she received huge backlash which seemingly led her team to ask her to remove the controversial tweets.

"Management has asked me to delete vid/articles," she explained on Monday, March 16. "I appreciate good discourse on unconventional thinking. Let's all just be safe out there, cuz whatever the cause the virus a real thing. May God be with us...prayers to alllllll."

While some people continued to lecture the singer, some others applauded her for being "a free thinker." A person said, "Don't allow management or record label put you in the box of just being an artist/musician. I believe you are bigger than that. Sometimes, our thoughts aren't totally refined but ppl prefer when it's raw n authentic instead of when it's manufacturered."

Fetty Wap Sued for Allegedly Choking and Punching a Woman

YG Gets Flirty With New Lady After Kehlani Split

YG Released From Prison Ahead of Grammys Performance

YG 'Has No Idea' Why He's Arrested, The Game Calls Out LAPD