The 'Chasing Time' raptress goes on a lengthy Twitter rant in response to Kim's comments on the leaked phone call between Kanye West and Taylor, accusing the reality TV star of jumping into the feud to keep herself relevant.

AceShowbiz - Azealia Banks has shown which side she is on in the recently reignited feud between Taylor Swift and Kanye West & Kim Kardashian. Defending the "Look What You Made Me Do" songstress, the raptress specifically attacked the reality TV star for jumping into the conversation that originally involved her husband and the pop superstar.

In response to Kim's tweet in which she reacted to Taylor's comment on the leaked phone call, the "212" hitmaker called out the rapper's wife. "You are just jealous that you don't have any actual talents and NEED to attach yourself to kanye and taylor for relevance," she wrote. "How did you get involved in the taylor beef anyway?" 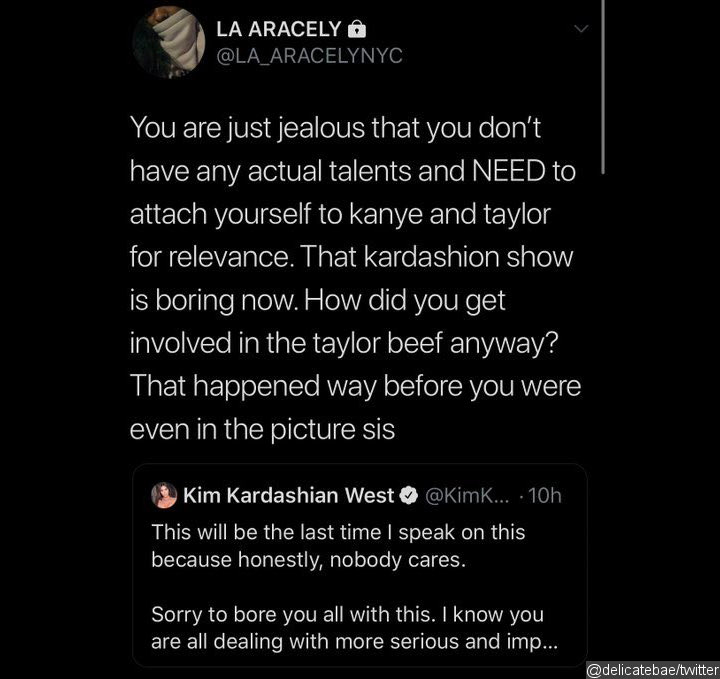 The 28-year-old Harlem star continued her rant in a series of Twitter posts. "All you did was make him look like an obsessive idiot. He's a 40+ black man who has been chastising some random white girl since she was 19. You as a Mother, a wife and a *beauty mogul* should have suggested he be the bigger person and not even keep bothering her," she added.

Bringing up Kanye's antics at the 2009 VMAs, Azealia remarked, "After her already humiliated her on stage. Instead of suggesting he behave like a Father you suggested it was okay to pretty much sexually harass her. What is some weird older man was doing that to north or Chicago? You'd be livid." 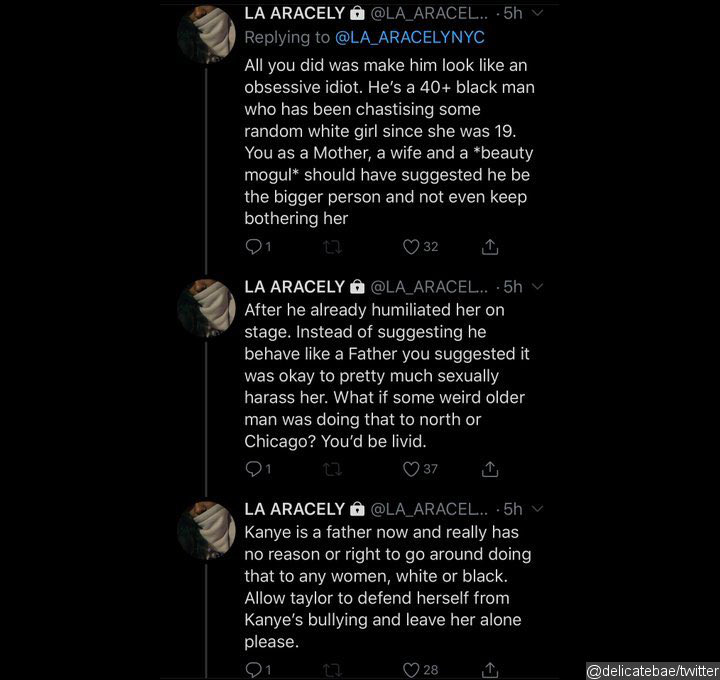 She then advised the mother of four to, "Allow taylor to defend herself from Kanye's bullying and leave her alone please. You're really f**king his art-whiz legacy by letting him do it and also CONTINOUSLY kicking that dead horse."

The "Chasing Time" femcee continued blasting Kim as comparing her works to that of Kanye's and Taylor's. "Both Kanye & Taylor have music that will survive them in the afterlife. YOU have not made any eternal contributions to the world. 100 years from now," she wrote. "You're trying hard to stay attached to a history you will most certainly never be a part of."

Taylor previously stressed she told the truth the whole time after the leaked phone call appeared to back up her claim that Kanye never asked for her permission to include the controversial lyrics about her in his song "Famous". Kim later hit back at the "Lover" songstress, accusing her of lying.