Tori Spelling Responds to Criticism Over Teaching Daughter 'Racism': 'It's Not My Intention'

The former 'BH90210' star apologizes after posting a picture on Instagram Stories that saw her daughter using Cheetos as fake nails with a caption, 'Hattie has become McQuisha in her Cheeto extension nails!'

AceShowbiz - Tori Spelling is owning up to her recent error of judgement. Finding herself in hot water after an Instagram photo of her daughter was deemed racist and insensitive by many, the Donna Martin of "Beverly Hills, 90210" came out with an apologetic statement in which she assured she has no intention to upset others.

The actress daughter of late TV producer Aaron Spelling expressed her remorse through an Instagram Story feed on Wednesday, March 18. "I posted a story the other day that upset many of you," she began her explanatory statement. "I'm truly sorry. That was NOT the intention at ALL."

"Hattie is 8. We watch and adore old reruns of Martin," the 48-year-old continued to share the story behind the offensive photo. "She loves the character Shanaynay. She made up that name with 'Mc' bc her last name is McDermott. She was reenacting the other the top fun and amazing character from Martin."

Stressing that her daughter "is innocent and didn't mean anything by it," the wife of Dean McDermott assumed responsibility for the social media blunder. "I should have thought about how it could have been perceived and misconstrued before I posted," she noted in the end of her post. "I did not. I'm truly sorry." 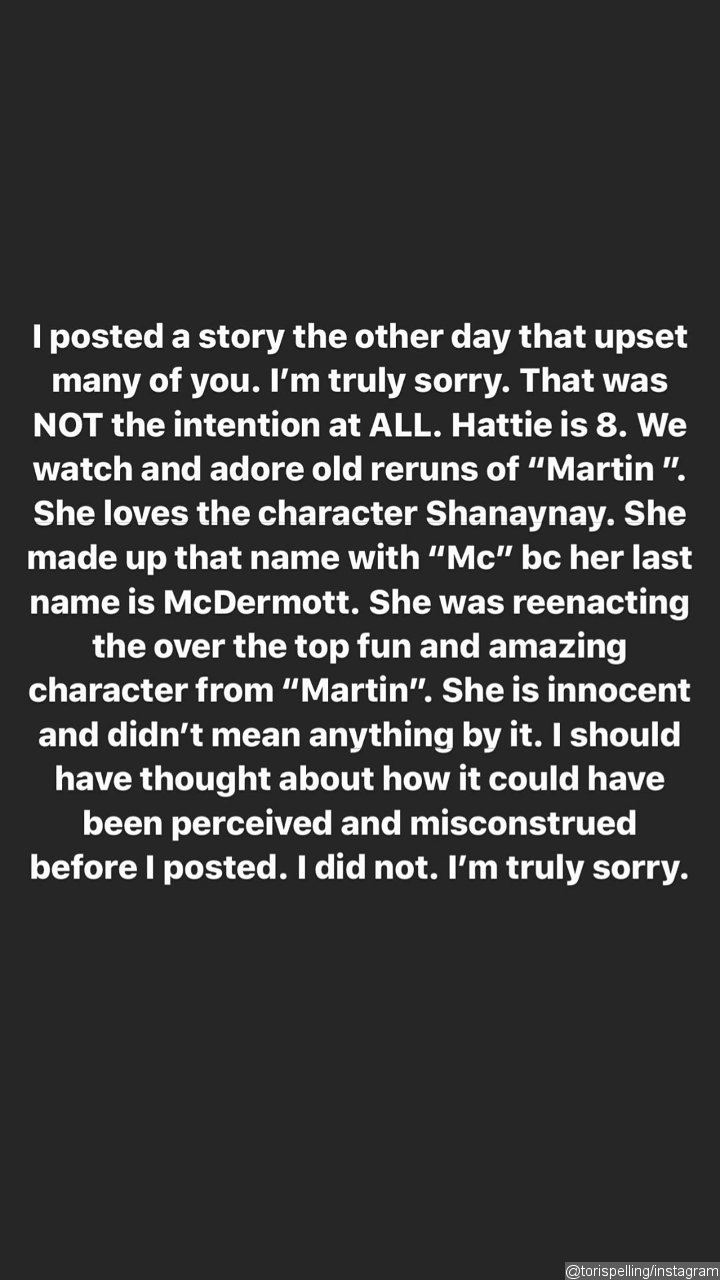 One day prior, Tori sparked controversy by posting a picture of Hattie playing dress up with Cheetos tied to her fingers and a green bandana over her head. In the caption that accompanied the photo, she wrote, "Days kept inside we have to get creative... Hattie has become McQuisha in her Cheeto extension nails!"

Many were quick to point out that McQuisha is a common black women name, and slammed Tori for teaching Hattie to be racist. One stated, "Is the same child you were just crying about being bullied and called fat??? Maybe you shouldn't expect sympathy at the same time you are teaching her negative stereotypes." Another wrote, "Oh wow! Teaching your little one of the ways of racism, eh? You ought to be ashamed of yourself."

The Pussycat Dolls Push Back U.K. Reunion Concerts to October