The 'High School Musical' star faces backlash after moaning about Donald Trump's warning that the coronavirus response could stretch into July, but later claims that her comments are 'taken out of context.'

AceShowbiz - Vanessa Hudgens has apologized for her coronavirus remarks which were deemed "insensitive" by many people. The actress came under fire after she seemingly made light of the pandemic in an Instagram Story video posted on Monday, March 16.

Responding to the backlash, she returned to Instagram Stories to retract her earlier statements. Claiming that some of her "comments are being taken out of context," she noted how serious the situation is as saying, "It's a crazy time, it's a crazy, crazy time and I am at home and in lockdown and that's what I hope you guys are doing too." She added, "Yeah I don't take this situation lightly, by any means, I am home."

Vanessa also took to Twitter to post her apology. "I'm sorry for the way I have offended anyone and everyone who has seen the clip from my Instagram live yesterday," she wrote. "I realize my words were insensitive and not at all appropriate for the situation our country and the world are in right now. This has been a huge wake up call to the significance my words have, now more than ever. I'm sending safe wishes to everyone to stay safe and healthy during this crazy time." 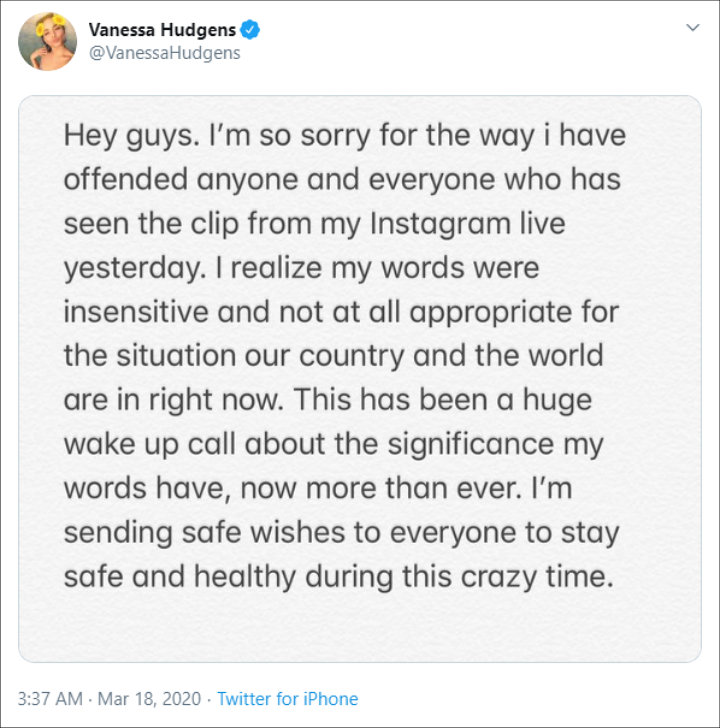 Vanessa Hudgens apologizes for her 'insensitive' comments about coronavirus.

On Monday, Vanessa seemed to respond to Donald Trump's warning that the coronavirus response could stretch into July or August. She whined, "Um, yeah, 'til July sounds like a bunch of bulls**t. I'm sorry, but like it's a virus, I get it, I respect it." She continued, "But at the same time, even if everybody gets it, like yeah, people are going to die which is terrible, but inevitable? I don't know, maybe I shouldn't be doing this right now."

Her video gained a lot of attention after journalist Yashar Ali tweeted about it. "What a horrible and heartless message for you to share with the younger people who look up to you @VanessaHudgens," the journalist wrote.

More social media users quickly weighed in on Vanessa's video, with one writing, "Y'all, I hate to say it but #COVID-19 can't kill a career that was already dead. Vanessa Hudgens just wanted us all to see if she was relevant enough for us to give a damn. Mission accomplished (in the worse way)."

Another slammed her, "One of the worst moves I have ever seen a celebrity make. Vanessa Hudgens almost sounds like she's doing a skit making fun of the dumb people who don't understand Corona, but she actually means it. She knew it too!"

"Vanessa Hudgens knows she's not an actual princess with a twin to blame this bulls**t on, right?" another Twitter user remarked. Someone else added, "Also regarding Vanessa Hudgens, she is not alone. There are literally MILLIONS of adults who are this stupid. Kind of why we're in all the s**t we are now. She's 31. Well, age has no bearing on intelligence or knowledge."

Lyle Waggoner Passed Away After Battle With Illness

These Stars Stir Controversy With Their Coronavirus-Related Comments