Among the people who slam POTUS over his comment is Mia Farrow, who writes through Twitter, 'Its called the Coronavirus and its now as American as apple pie so stop racist comments.'

AceShowbiz - Mia Farrow and Don Cheadle are among the stars slamming U.S. President Donald Trump for referring to coronavirus, aka Covid-19 as the "Chinese virus" in a new tweet about the pandemic.

After declaring the outbreak of Covid-19 a national emergency on Friday (13), Trump took to Twitter days later to share an update on how the U.S. government was dealing with the situation, with his post sparking outrage online.

"The United States will be powerfully supporting those industries, like Airlines and others, that are particularly affected by the Chinese Virus. We will be stronger than ever before!" he wrote, seemingly referring to the city of Wuhan, China, where the outbreak began in December (19). 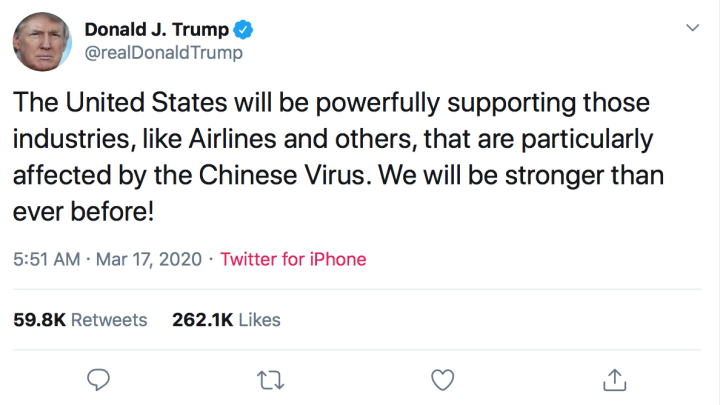 After sharing the post, stars, as well as high-profile names, took to the comments to slam the businessman-turned-politician for his "racist" post, with "Reckless" star Mia among the first to call out the President.

"Its called the Coronavirus and its now as American as apple pie so stop racist comments," she penned.

Meanwhile Don added: "chinese virus, huh? wow. still. aren't you feeling like you're in over your head yet? no?"

"How about you 'powerfully' support the American people by NOT KILLING THEM AND GET THEM THEIR F**KING TESTS YOU RACIST ****!"

Trump has yet to respond to the controversy.