Officials at the Auschwitz Memorial have criticized the Amazon Prime drama for its fictional deadly game of human chess, but creator David Weil explains the importance of the scenes to the series.

AceShowbiz - The creator of Al Pacino's new TV show "Hunters (2020)" has defended the show over controversial scenes that fictionalised atrocities committed during the Holocaust.

The Amazon Prime Video drama, which follows a team of Nazi Hunters in New York in the 1970s, led by Pacino's Holocaust survivor Meyer Offerman, features flashbacks to scenes in Nazi death camps - including one that features a fictional deadly game of human chess.

Officials at the Auschwitz Memorial have criticised the show, tweeting, "Auschwitz was full of horrible pain & suffering documented in the accounts of survivors. Inventing a fake game of human chess for @huntersonprime is not only a dangerous foolishness & caricature. It also welcomes future deniers. We honor the victims by preserving factual accuracy." 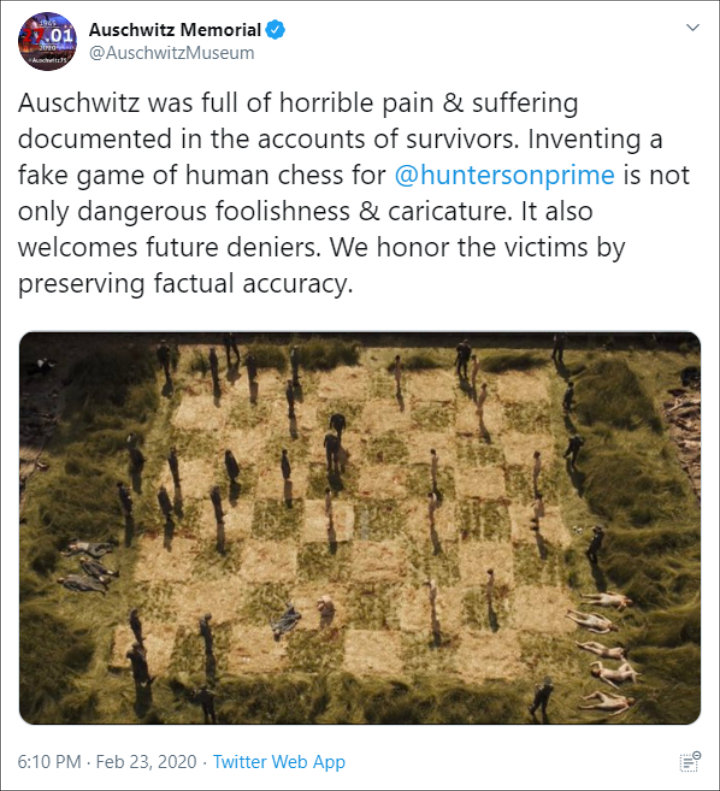 Creator David Weil, whose mother survived Auschwitz, has hit back at the idea scenes from the Holocaust should never be fictionalised for dramatic effect in a statement to Variety magazine.

After citing his personal connection to the horrors of the Holocaust, and explaining how his team had deliberately chosen to avoid characters' camp numbers corresponding to real victims, Weil addressed the controversy over the chess scene.

"In speaking to the 'chess match' scene specifically... this is a fictionalized event," he wrote. "Why did I feel this scene was important to script and place in series? To most powerfully counteract the revisionist narrative that whitewashes Nazi perpetration, by showcasing the most extreme - and representationally truthful - sadism and violence that the Nazis perpetrated against the Jews and other victims."

He went on to claim that he wanted to show a fictional atrocity, rather than a specific act that was perpetrated against real victims.

Weil concluded by writing that he is "forever grateful to the Auschwitz Memorial for all of the important and vital work that they do" and added, "I believe we are very much on the same side and working toward the same goals."

James Taylor Joins Season 18 of 'The Voice' as Mega Mentor

Helen McCrory: Cillian Murphy and I Were Behind 'Peaky Blinders' Production Pause