After report came out that Emani Ellis has launched a lawsuit against her, the 'Bodak Yellow' hitmaker goes on Twitter rant questioning why the guard didn't take her claims to police.

AceShowbiz - Rap sensation Cardi B has slammed allegations suggesting she attacked a female security guard during an altercation outside her doctor's office while she was pregnant.

Emani Ellis filed suit in Los Angeles County Superior Court on Friday (February 21), accusing the "Bodak Yellow" hitmaker of hitting her in the head, face, and body in February, 2018 after Cardi left a medical appointment in the Beverly Hills building where the guard worked.

Ellis, who is African-American, claims she was simply trying to take photos and record video footage of the hip-hop star as she approached, but Cardi, who was secretly pregnant with her daughter Kulture at the time, objected and asked her to stop.

An argument ensued, and Cardi allegedly lashed out at Ellis, reportedly spitting on her while hurling racial slurs and profanities, according to paperwork obtained by TMZ.

The plaintiff, who is demanding damages for assault, battery, and infliction of emotional distress, goes on to state the rapper "then used her celebrity status to get (Ellis) fired from her job as a security guard".

However, a representative for the medical building has made it clear it was actually Cardi's doctor and a staffmember who complained about what they considered to be a violation of their patient's privacy, which led to Ellis' dismissal.

Now Cardi has taken to Twitter to blast Ellis' allegations, questioning why she would endanger her unborn child's life by engaging in violent behaviour, and asking why the guard didn't take her claims to police.

"if I assaulted why she didn't press charges ? Why would I put my hands on some1 twice my size by myself while I'm experiencing sharp pain 4 months pregnant (sic)?" she wrote in response to the reports of the legal action.

Cardi then shared a photo of Ellis with her followers, and challenged, "GTFO (get the f**k out) ...see you in court tho (sic)". 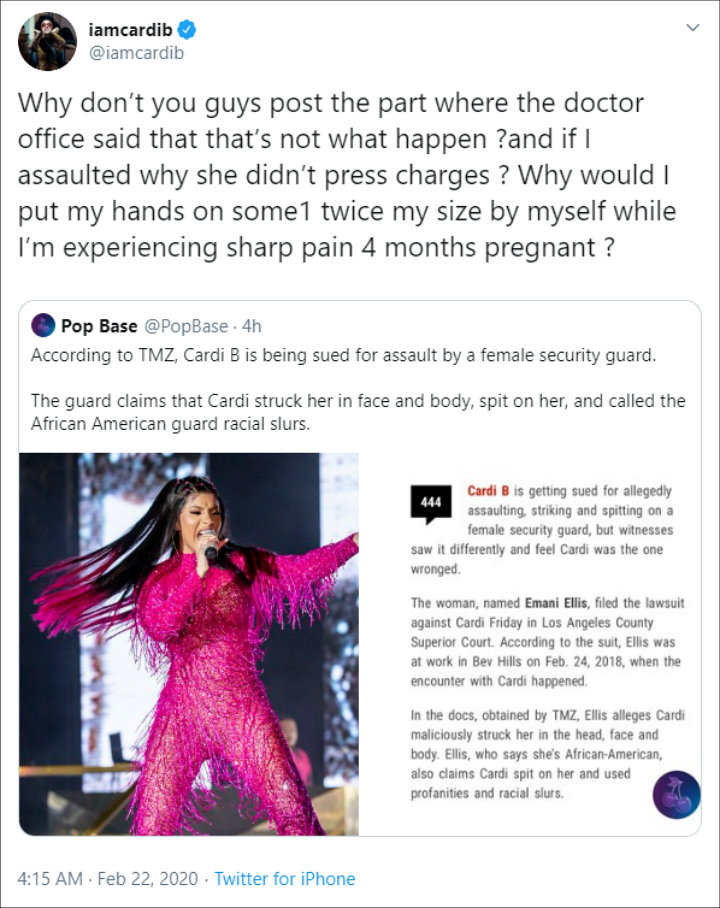 "I PRAY TO GOD THERES footage of wat happen dat day (sic)," she added, before branding the accusations "bulls**t".

Pregnant Grimes Sends Digital Avatar to Replace Her in Photoshoot

Cardi B's Pregnancy Due Date May Have Been Revealed