The YouTube star lands in hot water after appearing to suggest that mental illness isn't real in his Twitter post that reads, 'Remember anxiety is created by you.'

AceShowbiz - Jake Paul found himself trending online on Monday, February 17, but it wasn't for a good reason. The social media star became the butt of the jokes after he took to Twitter to share a post instructing people how to cure their anxiety.

In his post on the micro-blogging site, he believes that there's a simple way to cure mental illness rather than going to doctor and take medication. "Remember anxiety is created by you," he said, seemingly suggesting that anxiety isn't real. "Sometimes you gotta let life play out and remind yourself to be happy & that the answers will come."

He continued, "Chill your mind out. Go for a walk. Talk to a friend."

It didn't take long for the tweet to go viral with a lot of people ridiculing him. Some people even called him "dumb" and "stupid" for ever saying that, as one wrote, "Jake paul is so stupid like?? How is he allowed to just walk around spewing this bulls**t." Getting sarcastic, another quipped, "If you have asthma. Just go outside. Breath."

Someone didn't take his post well and wrote in all-caps, "BRO. THIS F***ING IDIOT HAS THE AUDACITY TO SAY THAT ANXIETY IS SOME MADE UP S**T AFTER RETWEETING SUICIDE HOTLINE NUMBERS." The person then urged fans of Jake, "Please, children, Stop following Jake Paul. He is the second dumbest c**t in the US, and what he says will hurt you when you grow up."

One other tried to see the positive side of it because s/he got an "amount of hilarious replies this beauty of a tweet has generated." Meanwhile, a different person wrote, "Jake Paul is so stupid LMAO. How the f**k is anxiety something you control & get rid of with 'taking a walk' LMAO someone get these f***ing youtubers w/ no common sense." 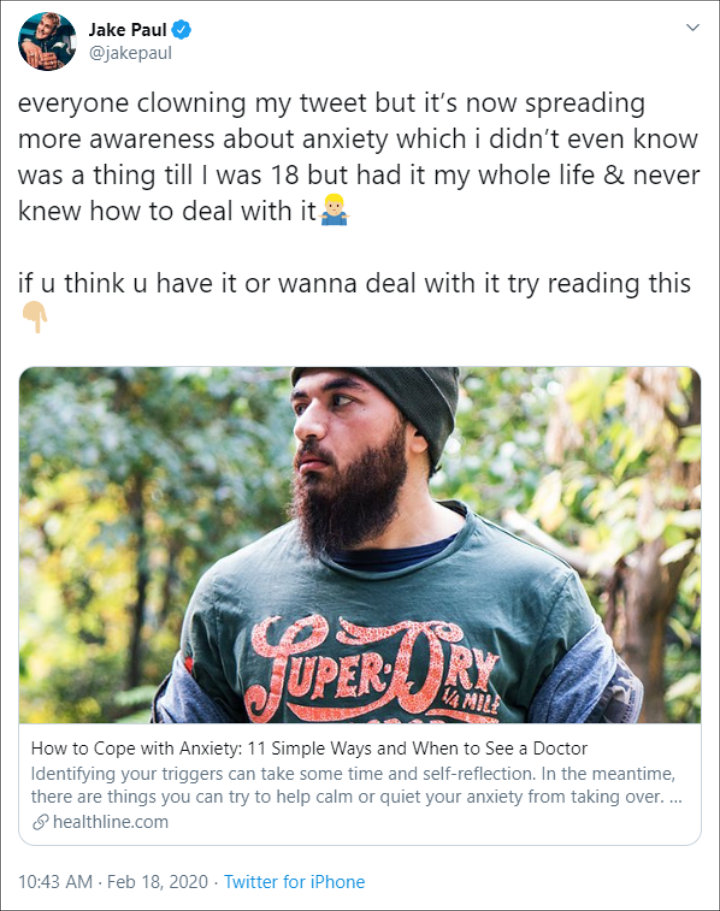 Jake Paul responded to the criticism.

Jake has since deleted the tweet after the controversy and wrote in response, "Everyone clowning my tweet but it's now spreading more awareness about anxiety which I didn't even know was a thing till I was 18 but had it my whole life & never knew how to deal with it." Sharing a link to an article about coping with anxiety, he added, "If u think u have it or wanna deal with it try reading this."

Kim Zolciak-Biermann Thanks Childhood Bullies for Giving Her Intense Motivation