The rapper takes to Instagram Stories to defend the TV personality, wondering why black people are roasting the latter 'as if there should be a right kind of black woman who gets invited to the oscars.'

AceShowbiz - More people come to Blac Chyna's defense amid the not-so-nice reactions she got over her attendance at the 92nd annual Academy Awards. Among them was Azealia Banks, who took to Instagram Stories on Sunday, February 9 to defend and seemingly throw a shade at the TV personality.

She said in her post, "Baffled as to why black people are s***ting on blac chyna at the oscars as if there should be a right kind of black woman who gets invited to the oscars. All showing their internalized self hatred." Appearing to call Chyna a nobody, Azealia added, "Plenty of white nobodies get invited to the oscars each year... what the f**k is the actual big deal?" 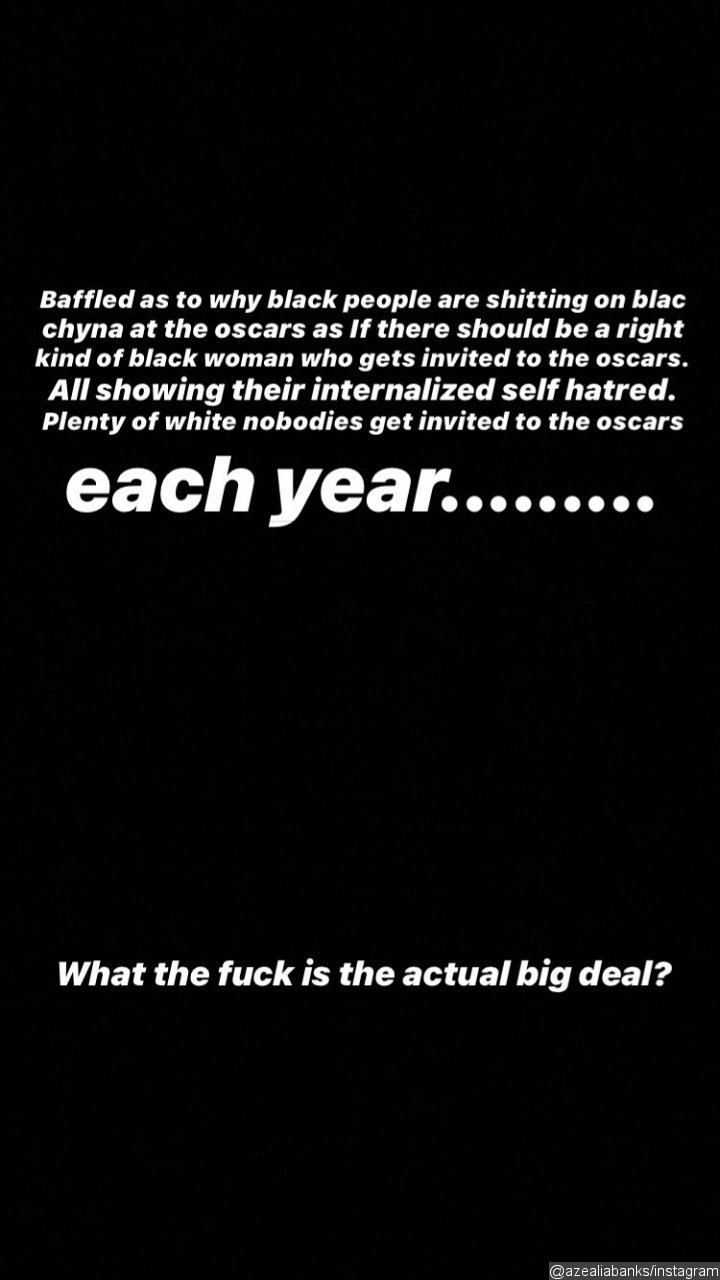 Some people noticed the subtle shade Azealia threw. "How did she defend her while simultaneously shading her an art," one wondered, with another agreeing, "People reading but not comprehending. She gave her a backhanded compliment." Someone else commented, "That's like is a compliment and a diss all in one with the 'nobody' line! But overall, she's right!"

Chyna became the subject of a trolling when she hit the red carpet at the Dolby Theater in Los Angeles on Sunday. Some people were confused as to why she managed to get an invitation to the biggest night in the film industry, while some others mocked her appearance as they accused the ex-fiancee of Rob Kardashian of getting under the knife again.

Not a few people had already come to her defense, with one saying, "Seeing so many negative and nasty tweets about Blac Chyna on the TL and most of it is from Bl*ck people. Y'all love to talk about loving Black Women until it's someone you deem isn't worthy of that courtesy." Another wrote, "These b****es are too damn salty that my good sis Blac Chyna is at the Oscars. U h**s just mad yall weren't invited."