Matt Reeves shares on Twitter the first official photo from the set of the Warner Bros. film that has Robert Pattinson starring as the titular DC superhero.

AceShowbiz - Principal photography on "The Batman" has officially begun. Director Matt Reeves announced the news on Twitter and marked the first day of production by sharing the first official photo from the set of the upcoming Warner Bros.-DC Films movie.

On Monday, January 27, the filmmaker posted on his account a picture of the film's clapboard sitting on a brown leather chair, which somehow fits the imagery of Wayne Manor. "#DayOne #TheBatman," he captioned it, with a shout out to cinematographer Greig Fraser. 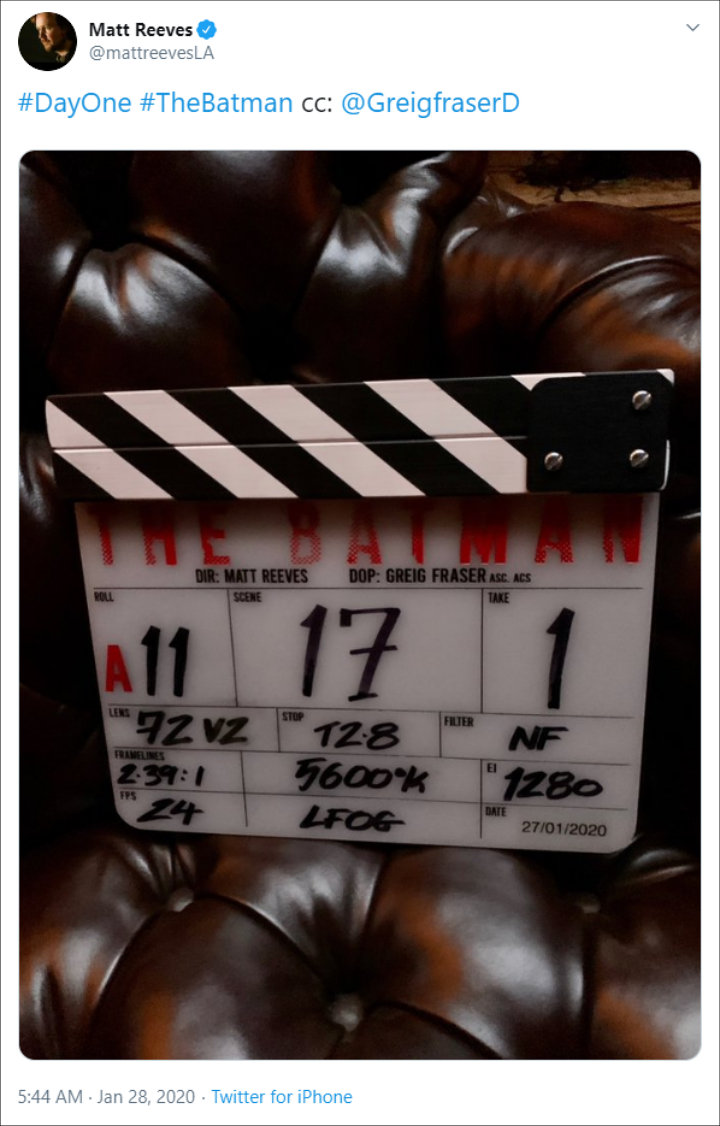 Matt Reeves announces production on 'The Batman' has officially begun.

While the photo barely reveals anything beyond what's written on the clapboard, it's enough to get fans riled up with excitement about the upcoming film. "YAS!!!" a fan commented below Reeves' post. Another wrote, "HERE WE GOOOOOOO! #TheBatman." Someone else expressed confidence in the director's take as saying, "I believe in Matt Reeves. My prediction.: The best Batman movie ever ( based on director, composer, cast ) I feel extremely confident."

Previously, photos from the movie's set in London leaked online, but they now appeared to be from second-unit filming. The photos offered a glimpse of Colin Farrell as the Penguin and someone wearing a scarf around his face and sitting on a motorbike who could be Robert Pattinson or his stunt double.

"The Batman" will focus on a younger Bruce Wayne than he was in previous movies. Reeves has shared his vision for the new Batman movie, saying, "It's more Batman in his detective mode than we've seen in the films." He added, "I'd love this to be one where when we go on that journey of tracking down the criminals and trying to solve a crime, it's going to allow his character to have an arc so that he can go through a transformation."

Zoe Kravitz joins the cast as Catwoman, Paul Dano is tapped to play Batman's villain The Riddler, Jeffrey Wright is said to play James Gordon, and Peter Sarsgaard is cast in a mystery role, with fans speculating that he might be portraying District Attorney Harvey Dent, who becomes the villain Two-Face.

LeBron James Breaks Silence on Kobe Bryant's Death: You Mean So Much to Us All