The 'A Beautiful Day in the Neighborhood' actor slams cannabis company CannaPro CBD for an ad that claims he endorses its product, saying he 'would never make such an endorsement.'

AceShowbiz - Tom Hanks made it clear he was not linked to cannabis business. On Tuesday, January 21, the "A Beautiful Day in the Neighborhood" actor turned to Instagram to blast an "international hoax" that claimed he endorsed CannaPro CBD products.

The Oscar winner addressed the issue by uploading an advertisement that showed a photo of him taken from the time when he was promoting "Sully" in 2016. "The advances Doctor Oz has made in the CBD industry are remarkable," read the quote in the ad. "I wouldn't believe it if I hadn't had the chance to try it out for myself. After using CannaPro CBD for two weeks I was already feeling like a new me."

Triggered by the exploitation of his image, the 63-year-old ranted on the photo-sharing platform, "This is false and an intentional hoax." He went on to add, "I've never said this and would never make such an endorsement. Come on, man! Hanx!"

His post drew reactions from people as one person commented, "As if Tom Hanks needs to 'feel like a new him'. HE'S TOM HANKS." Another one wrote, "Wow people just want to get rich using celebrities SMH." One other person said, "They should know if it was really you, it would be signed 'Hanx'."

Another person slammed the misleading ad.

Meanwhile, Mehmet Cengiz Oz a.k.a Dr. Oz, whose name was also mentioned in the ad, gave his reaction through Twitter. "Could not agree more with @tomhanks," he stated. "This is a fake and misleading advertisement intended to take advantage of consumers using false claims and our likenesses illegally. I am not involved with any cannabis companies." 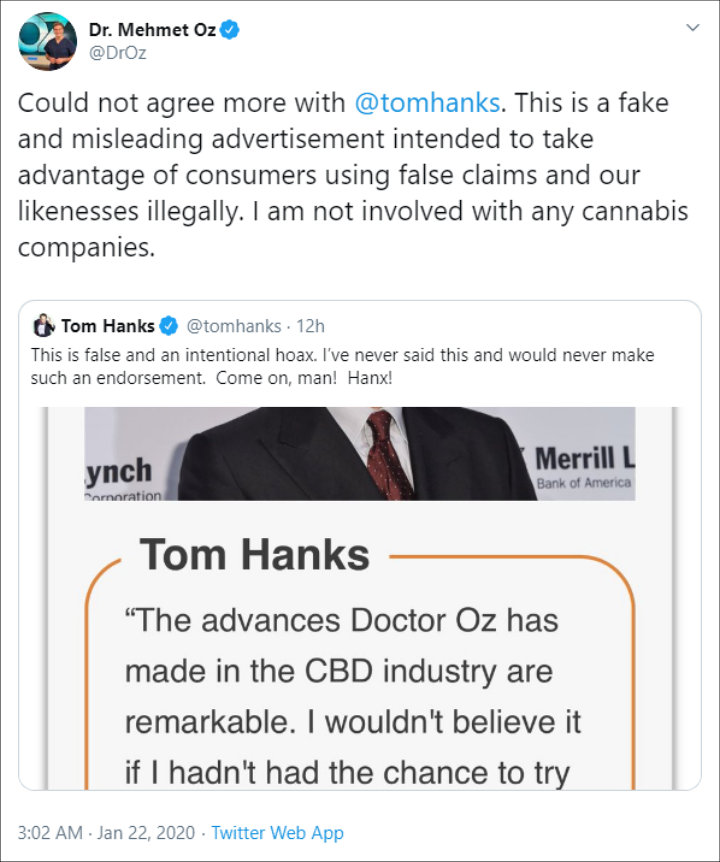 This is not the first time Hanks called out a misleading ad for using his name to attract people. In July 2019, the husband of Rita Wilson put out another fabricated commercial that quoted similar text. Instead of CannaPro CBD, the quote was used for Cali Naturals' ads. At the time, he exclaimed, "FRAUD! INTERNET FAKE! Just so you know. Hanx."