The 31-year-old wide receiver's former agent Drew Rosenhaus may receive a pallet full of 'bag of d**ks' after he terminated his relationship with the athlete.

AceShowbiz - Antonio Brown doesn't take his agent Drew Rosenhaus' decision to part ways with him nicely. The professional football player has blasted his former agent after the latter announced that he conditionally terminated his relationship with the athlete following his series of ordeals.

Responding to the announcement, the 31-year-old took to Twitter to threaten to send NSFW package to his former agent. "football season over you both can use pallet of @DicksByMail," so he tweeted on Thursday, January 16. 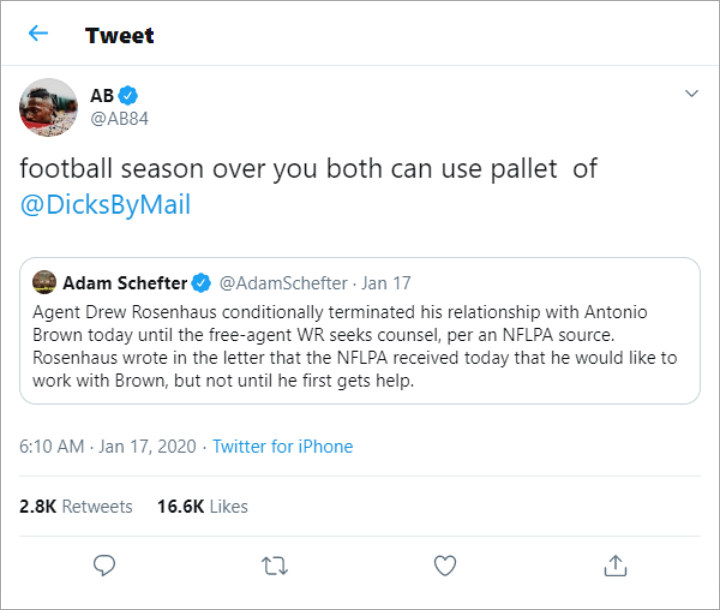 Dicks By Mail provides service that includes sending a bag of d**ks anonymously with a note reminding the recipient to "Eat a Bag of D**ks!", according to a description on its Twitter account. Antonio previously threw the d**k-shaped gummies at his baby mama Chelsie Kyriss during a confrontation over his claim that she stole his car.

Drew announced his decision to drop Antonio on Thursday, saying in a statement, "We made the decision to sever ties between Mr. Brown and the Hollywood Police Athletic League. We did not want our youth to be subject to this type of behavior nor emulate the actions of Mr. Brown." He noted that he would like to work with the wide receiver again, but he needs to get help first.

Antonio's attorney Darren Heitner additionally has removed himself as counsel for the former Pittsburgh Steelers star in a lawsuit filed in 2018 that alleges Antonio caused damages to a rented condominium, per an order granting motion to withdraw filed in Miami-Dade County. The court allowed Darren to withdraw as counsel on the landlord/tenant case that he handled until this week.

Earlier this month, Antonio called out his agent over his issues with the attorney, tweeting, "This lawyer I got through @RosenhausSports seems like Drew screw players over just like he did @terrellowens going to share some real info subscribe to my VEVO channel AntonioBrown."